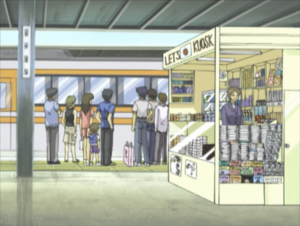 Let's Kuosk is a booth that sells goods on a train station between Yonezato Station and Domino Station in the Yu-Gi-Oh! anime.

It is based on the real-world Let's Kiosk booths on train stations in Japan. The real-world booth features a sun symbol between the words "Let's" and "Kiosk" in the name banner. For the Let's Kuosk booth, the sun is replaced with a flag of Japan. In the English dub of the anime, the name and flag are erased from the sign.

While bringing Serenity Wheeler to Domino City, Tristan Taylor got off the train at one stop to collect some food from Let's Kuosk. He ordered one of each of their box lunches, which included variety boxes, sandwiches, sushi, and eel among other things. The worker, Tamura, was astounded but Tristan asked her to hurry as the train was leaving soon. (In the English dub, the text is erased from all the lunch boxes and the food is changed to more Western choices, including cheeseburger and French fries, burrito supreme, macaroni and cheese, and sushi.)[1]