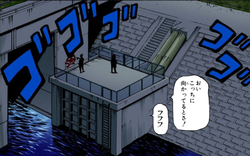 The canal yard is a location in Domino City in the Yu-Gi-Oh! manga. It was the setting of the Maze of Fire game.[1]

A trio of delinquents sent a note to Tomoya Hanasaki, claiming to have kidnapped Yugi Mutou and instructing him to meet them at the yard. After confirming Hanasaki was coming, they phoned Hanasaki's father, demanding he pay ¥500,000 for them to throw the ensuing fight to give Hanasaki a confidence boost. Since he could not pay, they beat up Hanasaki when he arrived at the yard.[1]