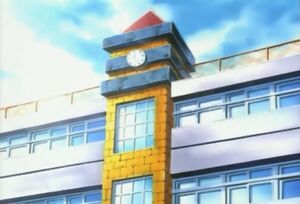 Domino High School (, Domino Kōkō) is a school located in Domino City which the city's teenagers, presumbly aged sixteen or seventeen years, attend. Yugi Muto and his friends, as well as Seto Kaiba, attend this school.

Some of the teachers enjoy abusing their power and making the students' lives miserable.

Like all other Japanese schools, Domino High usually has its own students doing chores, such as cleaning the classroom and mopping the floors.

The school's facilities include several classrooms, a library, long hallways, several lockers and a swimming pool. The other place that can be accessed is the roof, which gives people a panoramic view of the city. Yugi sometimes goes here if he wants to think.

Some of the rules include:

Violation of such rules can result in expulsion.

The hall monitor Ushio beat-up Jonouchi and Honda here, under the excuse that he was protecting Yugi from them bullying him. He imposed a bodyguard fee ¥200,000 and beat-up Yugi when he stuck up for Jonouchi and Honda. (In the Toei anime, he beat up Yugi for not being able to pay.) However Yugi solved the Millennium Puzzle and as Dark Yugi confronted Ushio and beat him in a Shadow Game, Money and Knife.[3][4]

ZTV hosted the staged bullying documentary Caught on Camera: School Violence for Survival Morning here. The director told his assistant Fujita to pose as a student and beat-up Yugi in front of a camera. Jonouchi broke up the fight, but when he confronted the director, he was limited by what he could do, as he was being filmed. Afterwards, Dark Yugi defeated in the director in a dice game Shadow Game.[5]

The alleged psychic, Kokurano, hosted a service during recess in one of the classrooms, in which he would make predictions for other students. Among his predictions were Anzu would meet a man and swoon before him in love and countless letters would fall from the heavens and bring disaster on Yugi. He tried forcing his prediction about Yugi to come true, by knocking bookshelves in the school library on him. However Yugi switched to Dark Yugi, who survived being injured. Kokurano tried making his prediction about Anzu come true by using chloroform to make her swoon before him. However he was confronted by Dark Yugi, who defeated him in the Shadow Game, Paper Crash!, in a classroom and exposed him as a fraud.Yu-Gi-Oh!|6|ref-6|[6][7] 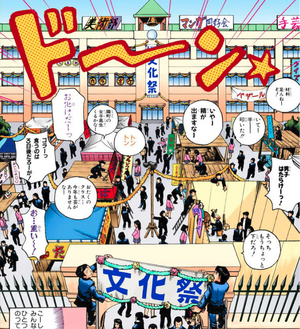 At the thirtieth annual school festival, Yugi's class setup a Carnival Games booth, but it was torn down by Goro Inogashira's class for their okonomiyaki stand. However Dark Yugi won the spot back in a game of Griddle Ice Hockey.Yu-Gi-Oh!|6|ref-6|[6]

The strict teacher, Ms. Chono, earned the nickname The Wicked Witch of Expel, after expelling six students over the course of six months. Angered over how a recent omiai went, she tired taking her anger out on her students by performing a bag and desk inspection. She found a wrapped gift on Miho Nosaka's desk, which was a love jigsaw puzzle from Honda. She began solving the jigsaw and reading its love message out to the class. With school rules against dating, she threatened to punish the sender, but lied that she might forgive them if they confess. Yugi, Jonouchi and Honda all confessed, so Chono continued to solve the puzzle to find out who really sent it. However Dark Yugi changed the jigsaw into the Dark Puzzle Shadow Game, so that Chono felt the pain she was inflicting on others as she solved the jigsaw. As she was about to announce who the sender was, her makeup peeled in parts shaped like jigsaw pieces, revealing her true ugly self. Chono then ran out of the room, insisting that the class never happened.[2]

Domino High School is the setting for the first stage of opponents in Yu-Gi-Oh! Duel Monsters II: Dark duel Stories. Here, the player must defeat students Yugi Mutou, Katsuya Jonouchi, Hiroto Honda, and Bakura Ryou to move on to the next stage, Kaiba Land.