Assistant Director Fujita is a character from the Yu-Gi-Oh! manga. 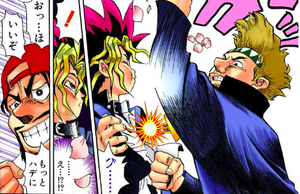 Fujita attacks Yugi for the documentary.

Fujita worked with the director for the documentary Caught on Camera: School Violence. The director showed Fujita a photo of Yugi Mutou and said that if they could catch him being beaten-up on camera it would be perfect. Fujita agreed that the public wants reality TV and this one has violence, so it should boost their ratings. However he asked how they were supposed to catch Yugi being beaten-up on camera. The director said that Fujita didn't get how the business worked and told him to get a school jacket as he was going to play the role of the bully. Fujita was not comfortable with this, but the director threatened to fire him if he did not do it.[1]

Using the photo of Yugi, Fujita learned his name from another student. He overheard Yugi and Katsuya Jonouchi talking about a rumored star at the school. When Yugi was alone, Fujita lied that he knew the star and offered to introduce them to Yugi. He told Yugi to meet him behind the gym at recess and come alone.[1]

When Yugi arrived, Fujita proceeded to attack him in front of the cameras. However Jonouchi saw what was happening and broke up the fight. Jonouchi threatened Fujita, who said that the director made him do it. The director cut filming at that point and told Fujita that was good and he could leave.[1]