Gozaburo Kaiba is a character in the Yu-Gi-Oh! manga. This is the original depiction of Gozaburo Kaiba. Gozaburo is Seto and Mokuba Kaiba's adoptive father and the former CEO of KaibaCorp. 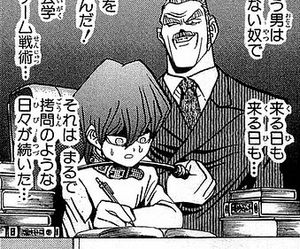 Gozaburo was the original founder and CEO of KaibaCorp and a chess grandmaster. He visited an orphanage, hoping to adopt an heir. Here he met Seto, who challenged him to a game of chess, with the stipulation that he and his brother Mokuba would be adopted by Gozaburo if Seto won. Gozaburo laughed at first, but said that Seto was an interesting kid and accepted the challenge, which Seto won through cheating.[1] 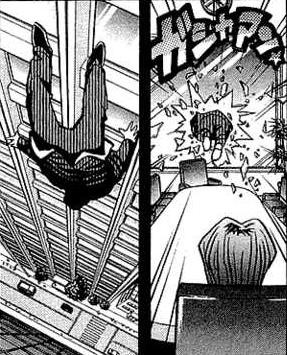 Gozaburo's abuse of Seto motivated Seto to overthrow him. Six years after the adoption, Gozaburo, Seto and ten others attended a KaibaCorp meeting. By the end of the meeting, the ten agreed that starting that day, Seto would be the new president of KaibaCorp. Seto smirked and asked "Have I learned what you wanted... 'father'?". Gozaburo replied that he has lost his game with Seto and asked him to burn it into his brain that this is what happens to a loser, before jumping out the window, committing suicide. Kaiba remarked that to lose means to die and thanked Gozaburo for teaching him that.[1]