Spiria (スピリア Supiria) is a spirit ka in the Yu-Gi-Oh! manga. She was the personal ka of Isis. 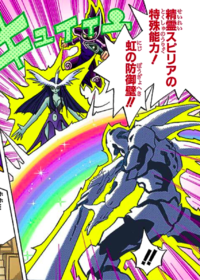 Isis summoned Spiria to help battle Diabound in the palace Diaha against Bakura, King of Thieves. She was dismissed after Atem ordered the High Priests to stand down.[1]

During the High Priests' mock Diaha, Isis summoned Spiria, who used the "Rainbow Barrier" ability to shield her teammates. The barrier was dispelled by Shada's Zerua and Spiria was soon defeated by Seto's Duos, whose power had grown by sacrificing its own allies.[2]

Following Mahado's death in a Diaha with Bakura, Isis sent Spiria to the Valley of the Kings to use her clairvoyance to search for Bakura.[3] Likewise when Atem disappeared following another Diaha with Bakura, Spiria was sent to look for him and found him alive in a canyon on the edge of the city.[4]