The Kaiba Manor butler ( Kaiba-tei Shitsuji) is a character in the Yu-Gi-Oh! manga. This is the original depiction of Hobson, from the anime.

The butler is a sadistic man, under Seto Kaiba's employment. He served as both the butler at Kaiba Manor and the orchestrator of the Electric Chair Ride in Death-T.

The butler once worked as a torturer, where he learned to resist torture himself, before being employed by the Kaiba family.[1]

Using his skills as a torturer, he designed the Electric Chair Ride part of Kaiba's Death-T theme park. The ride was designed to make the participants scream, which they must resist doing to avoid being electrocuted with ten million volts.[1]

Before the grand opening of Kaiba Land, the butler welcomed Yugi Mutou and Katsuya Jonouchi to Kaiba Manor. He along with other servants greeted them and Mokuba when they arrived. He explained that Kaiba would not be attending the pre-celebration for the grand opening of his special project, as he has retired to his room, having worked nonstop for the few days. Mokuba got him to prepare six meals, including two poisoned ones for his rigged game of Russian Roulette Dinner with Yugi and Jonouchi. When the game backfired and Mokuba was poisoned, the butler came to his aid.[2] 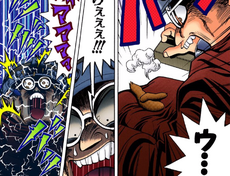 The butler gets electrocuted.

The next day, Yugi was forced to take part in Death-T. The butler, dressed in dark robes, met him and his friends in the Horror Zone in Death T-2. His sudden appearance gave Jonouchi a fright. He cackled that if that scared Jonouchi, Jonouchi would not be able to survive the next ride. He was about to lead the group to the Electric Chair Ride, when Yugi recognized him as the butler from Kaiba's mansion. He was hoping that they would not notice, but nevertheless proceeded and took them to a car on a set of rails.[1]

Yugi, Jonouchi, Honda and Anzu took seats on the car and Johji sat on Anzu's lap. The bulter locked them on, by cuffing their hands to the arm rests and had helmets with voice detectors put on their heads. He explained that they were about to take part on a ride, where they must not scream or they would be electrocuted. He too took part in the game, running the risk of being electrocuted. Having designed the ride and knowing how to avoid screaming, he thought he should be fine and could use his torture skills to make the others scream.[1]

The butler subjected the group to scary projections of monsters. Impressed that they managed to avoid screaming, he moved onto the next phase. Mechanical hands came out of the chairs and started to feel and grope the players. Johji worried that Anzu was going to scream, so he got down from her lap and went back to the butler, where he defecated on his lap. Once the butler realized what happened, he screamed out loud and was electrocuted.[1]