Professor Yoshimori ( Yoshimori Kyōju) is a character in the Yu-Gi-Oh! manga. He is a Domino University professor who is into archaeology. He is friends with Sugoroku Mutou.

Yoshimori has a wife and son, but neglected them in favor of his work.[1]

Shadi watching Yoshimori and Kanekura at the excavation.

Yoshimori, alongside Curator Kanekura, entered a tomb in the Valley of the Kings the and excavated many artifacts. Yoshimori did not believe in curses, and was not worried when he violated the tomb.[2] Unbeknownst to them, Shadi was watching and planning to punish them.[1]

Two months later, Kanekura and Yoshimori put the items that they found in the tomb on display in the Egypt Unearthed exhibition at Domino City Museum. Being an old friend of Sugoroku Mutou, Yoshimori gave free admission to the exhibition to Sugoroku, his grandson, Yugi and their friends. He showed them around the exhibition, telling them about archaeology and explained the Weighing of the Heart ritual, as they admired a sheet of papyrus, depicting the ritual.[2]

Shadi also attended the exhibition that day, hoping to pass judgment of Kanekura and Yoshimori. He secretly killed Kanekura for failing the Weighing of the Heart.[2] Although the death appeared as a heart attack, people suspected that it was the curse of the pharaoh, which even though Yoshimori did not believe in them, he became worried over this. Sugoroku knew that Yoshimori couldn't be taking the news of Kanekura's death well, so he Yugi, Jonouchi and Anzu went to the university to cheer him up.[1]

Shadi went to the university, to pass judgment on Yoshimori. Before doing so, he entered his soul room and found that Yoshimori was expecting his friends, including Yugi to arrive. Eager, to test Dark Yugi in a Shadow Game, Shadi redecorated Yoshimori's soul room, turning him into a "zombie",[1] with the motive to make Yugi's friends suffer, hoping this would draw Dark Yugi out.[3]

Yugi, Sugoroku, Jonouchi, and Anzu came to Yoshimori's office for a cheer-up party. However, Shadi got Yoshimori to strangle Jonouchi as to make the Yugi's "other side" come out.[1] Jonouchi's friends unsuccessfully tried to pull him off Jonouchi. Anzu successfully got him to let go by hitting him with a globe, knocking out three of his teeth. Shadi then decided that possessing Yoshimori won't be enough and redecorated Anzu's soul room too.[3]

Yoshimori tried to attack Jonouchi again, but Sugoroku stood between them, asked the professor what is going on and tried to remind him that they were friends. The professor punched Sugoroku away, knocking him unconscious. Jonouchi tried to draw the zombie professor away from Yugi and Anzu, so he started making gestures at the professor, prompting him to chase Jonouchi around the building. Jonouchi lead Yoshimori away and punched him hard in the face, hoping it will knock him back to normal. This took out more of the professor's teeth, but he got-up and continued chasing Jonouchi.[3] Jonouchi reached a dead-end and led the professor into a room, where he sprayed him with a fire extinguisher. The professor knocked the extinguisher out of Jonouchi's hands and pushed him out the window. Jonouchi managed to grip onto the wall and saw Anzu standing motionless on a board over the edge of the building overhead. He climbs up to help her, while the professor chased after him.[4] 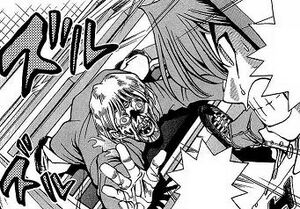 Yoshimori hassles Jonouchi, as he tries to hold Anzu up.

At the climax of Yugi's Shadow Game with Shadi, Jonouchi held up the board to prevent Anzu from falling. However Yoshimori started pulling at his leg. Dark Yugi instructed Jonouchi to make Yoshimori touch the Millennium Key. Jonouchi complied and Yoshimori was returned to normal.[5]

Yoshimori was shocked to find himself high-up on the side of the university and missing a number of teeth. He and Jonouchi climbed up onto the roof, where Yugi and his friends confronted Shadi over using them in this game. After Shadi departed, Yoshimori commented that he had no memory of what happened and Jonouchi tried to blame Anzu for breaking his teeth. He apologized for not being able to offer them anything, but Sugoroku treated them all out to a meal instead.[5]