Johji (ジョージ Jōji) is a character in the Yu-Gi-Oh! manga. He is Hiroto Honda's baby nephew.

Johji admires Seto Kaiba and tends to dislikes Hiroto and his male friends. He is quite precocious, spews curse words at times and hits on Anzu Mazaki. He is recognizable for wearing a duck costume.

Honda's sister got Honda to babysit Johji. After constant whining from Johji, Honda took him to Kaiba's amusement park, Kaiba Land. When Honda saw Kaiba forcing Yugi to partake in Death-T, Honda volunteered to help Yugi and took Johji with him, although Johji started cheering for Kaiba.[1] 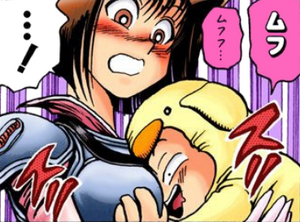 In Death-T 1 Honda gave Anzu Johji to mind while he took part in the Stardust Shootout. Johji started acting cute at first, but plunged his face into Anzu's breasts.[1]

While Yugi, Jonouchi and Honda played the shootout game, Johji started flirting with Anzu, suggesting that they ditch the others and go on a date in the park. Honda, Yugi and Jonouchi left the game and came back to Anzu, after Honda realized that he, Yugi and Jonouchi had been given dud guns, while the their mercenary opponents have lethal ones. He cursed Kaiba for playing such a dirty trick. Johji became enraged, grabbed Anzu's gun and started shooting at the boys for interrupting his time with Anzu and bad mouthing Kaiba. Johji's shooting revealed that Anzu, who had been employed by Kaiba Land, unaware that she was Yugi's friend had been given an operational gun.[2] 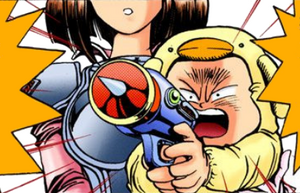 Johji helped Honda in the shootout by hiding on Honda's back with the working gun as part of a sneak attack. Honda had previously offered him a bath with Anzu in exchange for his help. Johji reminded him of this and Honda begged Anzu to do it, but she blatantly refused.[2]

To her displeasure, Anzu had to carry Johji to the next stage, as he would cry if anyone else held him. He annoyed Yugi by touching Anzu's breast.[3]

At the start of Death-T 2 the group were put on the Electric Chair Ride, where the riders would be electrocuted if they screamed. Johji sat on Anzu's lap, rather than be strapped to a chair. The Kaiba Manor butler sat at the back on the ride, orchestrating the terrors, while strapped to a chair himself.[3] 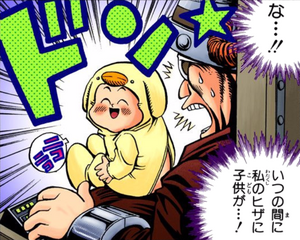 Johji defecates on the butler.

Before the ride started, Anzu cried that she wanted to go home. Johji told her not to worry that he would protect her, again making Yugi mad, while Johji thought to himself that this should make Anzu fall in love with him. During the ride, when Anzu could not take any more, Johji got off her lap and went back to the butler. Johji sat on his lap, defecating on him, causing him to roar and get electrocuted. Without the butler controlling the horrors, the group survived the ride.[3]

After the ride, the group entered the Murderer's Mansion and the door slammed shut behind them. Johji called Jonouchi a dummy for trying to reopen it, reminding him that they came in that way and need to find an exit. The older members of the group had their hands trapped inside a guillotine by Kaiba. Johji sat still bored, while they tried to figure out how to save themselves.[4] 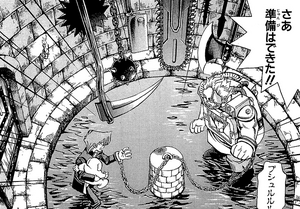 After the group saved themselves from the guillotine, Johji got kidnapped by the Chopman. He lied about being alone in a chamber in order to please Kaiba. The others didn't believe him, so Kaiba appeared on a monitor and explained that they must send one person into the chamber to battle the Chopman, or he would order the Chopman to kill Johji. Jonouchi stepped inside, to repay Johji for saving their lives before. However Johji betrayed them once more and attached a handcuff to Jonouchi, saying Kaiba made him do it and he didn't want to die. Jonouchi battled the Chopman to save Johji. With help from Yugi, Jonouchi managed to save himself and Johji, while setting fire to the Chopman and Johji thanked Jonouchi afterwards.[5]

Johji fell asleep before entering Death T-3. He slept through the room of falling cubes, while the others passed him around, struggling not to get squashed.[6]

He was eventually woken up the noise from the audience after Yugi beat Kaiba in Duel Monsters. He started to get mad at everyone for waking him up, but realized that he, Anzu and Jonouchi were being held at gunpoint and started to play dead. Honda arrived and started to fight off the guards with the guns along with Jonouchi. Johji cheered for Honda as he did so.[7]

After Death-T, Yugi suggested that they go to visit Sugoroku in the hospital. Johji invited himself, saying that the nurses at the hospital are hot.[7]

Johji took part in the following games. While not an official player in these games, he did help out.