Exodia the Forbidden One (manga character)

Exodia the Forbidden One, known as simply Exodia (エクゾディア Ekuzodia) in the Japanese version, is a character in the Yu-Gi-Oh! manga. It is also known as the Demon God of the Palace (の Ōkyū no Majin) in both the English and Japanese versions.

Exodia was a ka which Siamun Muran could Summon, and was used in the battles against the foreign invaders and Zorc Necrophades. Its corresponding Duel Monsters card is "Exodia the Forbidden One". 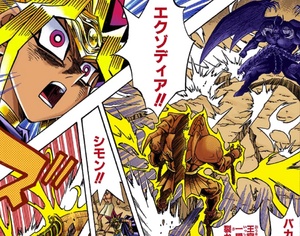 Exodia was Summoned by the High Priests, shortly after the forging of the Millennium Items. It, along with other ka, was used to defend Akhenamkhanen's kingdom from armies of foreign invaders.[1] Legends said that it defeated a thousand armies in a single night.[2]

During the Diaha against Zorc Necrophades, Siamun Muran recovered the Millennium Key, that he had once given to Shada, from Shada's deceased body and used its power to Summon Exodia from its five slabs in the Shrine of Wedju. Using its "Exodia Blaze" attack, it defeated Zorc's Army of the Dead in an instant. Siamun then focused his attention on Zorc and had Exodia aim an attack at him.[2] Zorc became engulfed in flames, but managed to endure it. Zorc fought back with a "Dark Phenomenon" attack, splitting Exodia down the middle. Its destruction drained Siamun's ba, killing him.[3]