Sera (セラ Sera), also known by her Neurons avatar Prana (プラナ Purana), is a character in Yu-Gi-Oh! The Dark Side of Dimensions and "TRANSCEND GAME".

Full body views of Sera in film promotions and the manga, as herself and her Duel Links avatar

Sera is a young Egyptian girl with brown hair. She wears a pink dress that partially exposes her shoulders, with an ankh symbol at the center. On her head she wears a golden tiara and each of her two locks are wrapped with two golden rings. Both her arms and legs also have golden rings on them, and she also wear purple shoes.

Her VR avatar, "Prana", has the form of an adult woman, contrasting her real-world self, who is still a child. Her avatar wears a coat, hood, mask, long gloves, boots and retains the ankh symbol of her regular clothing. In this avatar, she wields a sword-shaped Duel Disk.

Sera's personality differs significantly between "TRANSCEND GAME" and Yu-Gi-Oh! The Dark Side of Dimensions. In "TRANSCEND GAME", she is calm and manipulative, tricking Seto Kaiba into trying to access the afterlife apparently in order to kill him and reacting to setbacks with giggles. By the time of The Dark Side of Dimensions, she has began to rebel against her brother Diva as she attempts to turn him from his dark path, and she acts kinder and more heroically towards Yugi.

Sera, her brother, Diva, Mani and other orphans lived with a slave merchant. He would allow them to sleep in his house, but they would have to beg on the streets for money. If he was not satisfied with the amount they brought back, he would scold and refuse to feed them.[2] 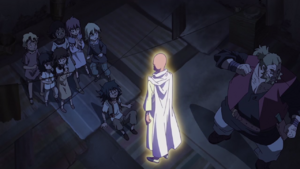 Sera and her cohabitants, rescued by Shadi Shin.

After Diva and Sera returned an unsatisfactory amount of money, they were scolded by the slave merchant and apologized to the other children for costing them a meal. Mani insisted it was not their fault and that no matter how much they brought back the slave merchant would say it was not enough. He offered them a pillow, saying hugging it almost feels like having a big meal. After hearing the group laughing, the merchant entered the room, demanding to know what was funny.[2] 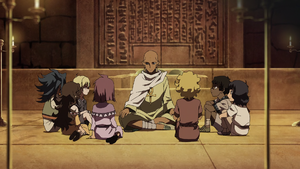 Sera and her friends, under Shadi's mentorship

Shadi became a mentor figure in the children's lives and gave them the power of the Prana. In the Mortuary Temple, he taught them about the Millennium Items. One day, Bakura's father entered the temple in the hopes of purchasing the Millennium Ring. The events led to his son, Ryo Bakura, coming into contact with the Ring, awaking Dark Bakura, who then killed Shadi and attacked the children.[2] 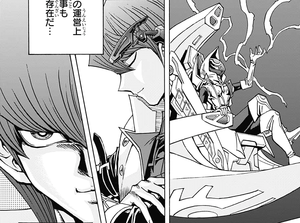 Kaiba admires Prana's dangerous element, but is also cautious of it.

Sera was a successful applicant for testing KaibaCorp's Neurons virtual reality system.[3] She used the avatar Prana, while using the VR system.[4]

While on the Crystal Cloud Network, she heard that the Dragon Knight Airborne Brigade had a reputation, so she sought them out and challenged them to a Duel. The guild laughed at the idea of a single person facing the entire guild. However she Summoned her "Duza the Meteor Cubic Vessel", which due to her high brainwave frequency had an ATK of 8800 Pulse, allowing it to easily destroy the Dragon Knight Airborne Brigade's "Cosmic Mineral Dragon Stone Head Dragon". She then remarked that the guild were not as much as they had been hyped to be, before flying away.[3]

Seto Kaiba, who had watched her face the guild, commented that she must have a brainwave frequency that transcends that of a normal person and that she could be dangerous. While he found this captivating, from a business perspective, he could not let it go unchecked, so he took note of her name. Sera removed her Neurons gear afterwards, catching the attention of Kaiba, who was standing on a bridge above the testers.[3] 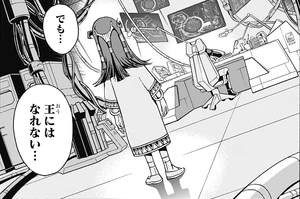 Sera approaches Kaiba, at his house.

A few weeks later, Sera approached Kaiba in his laboratory, at his house. After overhearing him mention that he would rule his Duel Links world, as King, she commented that he could never become King. Kaiba recognized her from the test session and was impressed that she was able to get inside.[4]

Sera claimed to be the test subject whose duty it is to shape his new world. She thanked Kaiba for the creation of Duel Links. She discussed the prospect of an individual with superior consciousness being in the system and the Duel Links potential to grant access to other dimensions, beyond the realm of the living, something she knew Kaiba was interested in. She suddenly disappeared as she talked about Kaiba syncing with this superior consciousness.[4]

When an unfamiliar consciousness emerged in the Duel Links world, with all test subjects' neuro signals being drawn to it, Sera through her avatar Prana, located Kaiba in the Duel Links world. She flew her ship next to Kaiba's jet and warned him of the danger he was approaching. She asked if he was prepared to face a world of evil, transcending the boundaries of mortal man. She offered to let him proceed if he could defeat her in a Duel, but that he would die if he lost.[4] 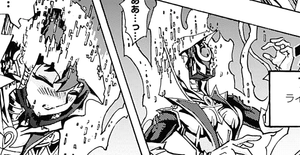 Kaiba accepted the Duel. His "Blue-Eyes White Dragon", with 3000 Pulse ATK, at first seemed no match for her 8800 Pulse ATK "Duza the Meteor Cubic Vessel". Kaiba controlled his thought frequency, bringing its Pulse to 19900, destroying "Duza" and defeating Prana.[4]

Having lost the Duel, Sera's "Prana" avatar disappeared, leaving her in her regular appearance. She was slightly annoyed, as she had liked the style of that avatar. Having made her attempt to stop Kaiba, Sera said that there was now no turning back and accompanied him as they approached an apparition of Atem. However they were logged out when Mokuba Kaiba performed an emergency shutdown on the Duel Links, as Kaiba's amplified brain activity put his life in danger.[4]

Sera was later approached by Tomo, who asked her what book she was reading. Before she could answer, they were both distracted as Tomo accidentally let his balloon float away. After she resumed reading her book, she was approached by Aigami, who commented that Sera had gotten very close. Aigami returned the balloon to Tomo and said to Sera that Kaiba was not somebody they could easily eliminate.[4]

Sera learned that Diva had Dueled Seto Kaiba. She projected herself to Domino High School, where Diva was posing as a student named "Aigami". Diva informed her that Kaiba had located the Millennium Puzzle. They worried that if re-completed the puzzle, the pharaoh, Atem, would resurrect in Yugi Mutou's body and they would lose the power of the Prana. Diva planned to get rid of Yugi's body to prevent this, but Sera said he was going too far. She warned him that he was blinded by hatred and if he did not stop, the hatred would destroy him. Diva handed her one of the pieces of the Millennium Puzzle he had stolen from Kaiba. As she teleported away, she said that she still believed in Diva and asked him to consider what she had said.[2] 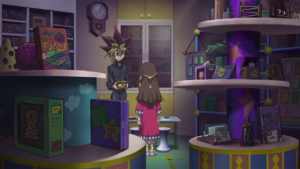 Sera went to the Kame Game shop to meet Yugi. She admired the Millennium Puzzle box he had on the table. Yugi told her it was very special and that it was where he kept the Duel Monsters cards that were extra precious to him. Sera replied that she thought he meant "extra precious to [him] and extra precious to the pharaoh". She told him that she learned about the pharaoh from her master, Shadi Shin. She projected herself and Yugi to the Prana Realm, as she explained that Shadi had bestowed the power of the Prana onto her and others. And that the power could be used to remake the world, to turn it into some place beautiful, but if misused it could do the opposite. She told Yugi that the realm was the gathering place of the Prana, who carry on the will of Shadi, but that there was descension among them, which could mean trouble for all of mankind. With nobody to turn to, other than Yugi, she disappeared, leaving him with the piece of the Millennium Puzzle.[2]

When Yugi was about to get hit by a truck, Sera appeared and teleported him to safety. When Yugi asked her why she gave him the piece of the Millennium Puzzle, she replied that it may be the only way to save her brother. She told Yugi that it was his choice whether he should complete the Millennium Puzzle.[2]

Diva learned that Yugi had the piece of the Millennium Puzzle. Sera then appeared before him and apologized, but still maintained that she made the right decision by giving Yugi a piece of the Puzzle.[2]

When Diva was defeated by Yugi in a Duel, the Prana children began to worry what would happen to them. Sera told them to stay calm and that fate of their future was for Yugi to decide.[2]

During Yugi and Kaiba's Duel, Diva returned, warped by the evil of the Millennium Ring and morphed into the monstrous Dark Diva, by the power of the Ring and Quantum Cube. Sera and some of the other Prana children teleported in front of him. She tried to tell him he was misusing the power of the Prana. Dark Diva then attacked her and the other Prana, causing them to disappear.[2]

After Diva was freed from the influence of the Millennium Ring, she and Diva parted ways with Mani, on good terms.[2]