Koji "the Spider" Nagumo is a character in the Yu-Gi-Oh! manga. He is a student and gamer in Domino High School.

Kyoji Yagumo in the Yu-Gi-Oh! ZEXAL manga may be inspired by this character. The characters have similar names and are linked to spiders. 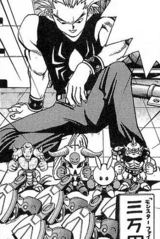 Koji with the stolen Monster Fighters.

Nagumo attempted to monopolize on the popularity of Monster Fighter, while it was popular and shops had limited supply. He would steal equipment from others and sell them at an inflated price of ¥30,000 (about US$300 at the time). He presented himself as a keen gamer to Yugi Mutou, inviting him to play Monster Fighter, while they were at school. However after they began, he announced his "house rule", in which the loser must surrendered their gun and figure to the winner. While Yugi was shocked by this, Nagumo hit him and took his gun and monster, Alti.

Dark Yugi approached Nagumo, at the gym, where he had been selling Monster Fighter equipment. He challenged Nagumo and his Wild Spider to a match, using Killer Emaada, which he had borrowed from Katsuya Jonouchi. Dark Yugi warned Nagumo that their the game would be a Shadow Game. In the first round, Nagumo attempted to punch Yugi. However this distracted him enough for Dark Yugi to knock out Wild Spider. The nature of the Shadow Game, caused Nagumo to suffer the pain inflicted on his monster, resulting in his face being cracked.[1] In the second set, Nagumo cheated by kicking Dark Yugi in the side, allowing Wild Spider to land three intense blows to Killer Emaada torso, winning the set. Enraged, Dark Yugi intensified the game, raising the "shadow mode" to level three. When Nagumo tried to cheat again in the third set, but his legs were held down by all of his stolen monsters and his own Wild Spider. Meanwhile the monster on his gun had been replaced by a twisted caricature of his soul, composed of Wild Spider's body with his Nagumo's face and arms. Dark Yugi then dealt the killing blow, piercing the representation of Nagumo's soul, and leaving the real Nagumo unconscious.[2].

Nagumo was unhappy with the card he had won through the ante rule, after one of his Duels. He demanded that his opponent give something of equal value to his card, "Hyozanryu" or ¥100,000 (about US$900 at the time).

However, Mokuba Kaiba appeared and calls a foul for changing the ante and wagering money. Nagumo threatened Mokuba and told him not to mess with his rules. However Seto Kaiba arrived and warned Namugo that insulting Mokuba is insulting Kaiba Corporation. Kaiba tore up the "Hyozanryu" card, saying Nagumo was going to lose it anyway. He challenged him to a Duel, anteing a briefcase of rare cards and "The God of the Obelisk". He allowed Koji to use the cards from the briefcase in the Duel, to compensate for "Hyozanryu", but said he would take them back after he wins. Despite his newly empowered deck, Nagumo suffered a devastating defeat as Kaiba unleashed "Obelisk". Kaiba took Nagumo's Puzzle Cards, leaving him traumatized by the overwhelming power of "Obelisk", and screaming in terror as he relived the image of the God crushing him.

For Monster Fighter, Koji used the monster "Wild Spider". He also had a number of stolen fighters, which he sold.

The only card seen in Koji's Duel Monsters Deck was "Hyozanryu".