Tomo (トモ Tomo) is a character in the Yu-Gi-Oh! manga. 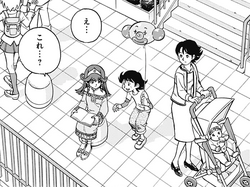 Tomo, asking Sera about her book

Tomo received a balloon, shaped like a clown's head and the woman watching over him instructed him not to let go of its string. However he forgot this advice, as he asked Sera what book she was reading. The balloon floated out of his reach and the woman scolded him. However Aigami managed to retrieve the balloon and return it to Tomo. Sera then said that she was finished with her book and handed it to Tomo.[1]