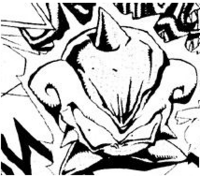 Pokii is a character from Dark Bakura (manga)'s Monster World.

After Yugi Mutou freed it from its evil influence, Pokii joined the side of the adventurers. When Zorc's weak point was exposed, Pokii jumped in the hole to prevent it from closing. Pokii told the party to destroy it along with Zorc, but Yugi managed to defeat Zorc and rescue Pokii in the process.

Pokii makes a cameo in episode 60 of Yu-Gi-Oh! 5D's, as a statue alongside other Monster World creatures at a theme park.