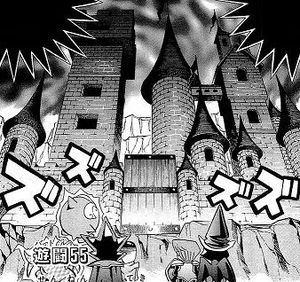 Zorc Castle is a location in the Monster World role-playing game played in the Yu-Gi-Oh! manga. 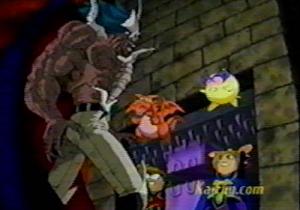 The castle contains a number of traps, including a tower with a spiked ceiling, which can be dropped. The bottom of the tower contains a pedestal with two semi-circle patterns at the top of the front face. The ceiling ha a similar block with two semi-circles near the bottom. If the ceiling is dropped while people are inside, they can hold it for a certain amount of time before being crushed. If they roll matching numbers on the ten sided dice, which contain semi-circles at the top and bottom a third block is placed between the existing two forming a tower containing the number. Possible combinations include 00, 33, 66, 88 and 99.[1]

In the setting of the game, the castle once belonged to a king and queen. However Zorc assassinated them and turned it into his den of evil and terrorized people of the land with monsters.[2]

Yugi and his friends played Monster World as adventurers, who tried to stop Zorc's reign. They received directions to the castle from Villager D, who was played by Mr. Karita.[2] By the time they reached the castle, Dark Bakura had sealed the souls of Yugi and his friends in the figures of their characters, while Dark Yugi was left to roll for his friends.[1]

The adventurers got trapped in the tower with the spiked ceiling about to crush them. However Dark Yugi managed to figure out how to get the middle block and rolled a key number.[1]