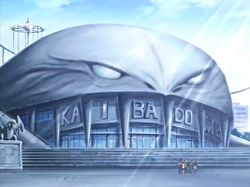 The Kaiba Dome is a large Dueling stadium in the Yu-Gi-Oh! series located within Kaiba Land.

It is constructed in the shape of the head of a Blue-Eyes White Dragon, reflecting Kaiba's signature card. It includes at least one very large Dueling arena surrounded by bleachers. It also has a mechanical roof that can open up.

Inside of Kaiba Dome 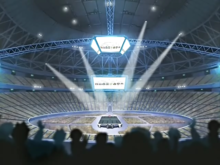 Inside of Kaiba Dome (closed)

It is first seen in the Grand Championship arc, when Mokuba presents it to Yugi and his friends during a tour. While inside, Yugi, as well as Rebecca Hawkins, are asked for autographs by several fans who were previously watching a Duel on a computer, the KC DuelTek 760, built in the center of the arena. One, named Rick, asks Yugi for help with his Deck, and he gives Rick the "Heart of the Underdog" card. Rick uses it in a Duel with the computer right away, but the Duel gets hacked by Zigfried von Schroeder, drastically raising the stakes. Fortunately, Yugi takes over Rick's Duel and wins.

Afterwards, the Kaiba Dome becomes the center of the Grand Championship tournament. The KC DuelTek 760 is also used again during Kaiba's Duel with Zigfried.

During the Society of Light arc in Yu-Gi-Oh! GX, the Kaiba Dome is frequently used to house matches between Pro League Duelists. However, the floor of the main arena has been changed from its original gray-ish white hue to a vibrant green, and the KC DuelTek 760 is removed.

In the dub of Yu-Gi-Oh! 5D's, the Memorial Circuit is referred to as the Kaiba Dome.