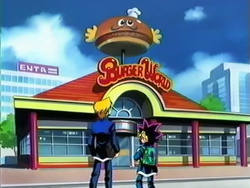 Burger World, in the Toei anime

Burgerpalooza[1], known as Burger World (バーガーワールド Bāgā Wārudo) in the manga and Japanese version, is a fast food restaurant in Domino City. 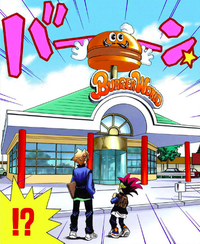 Burger World, in the manga

Anzu Mazaki got a job at Burger World, while still in school, in order to earn money to travel to America to become a professional dancer. She tried to keep this job a secret, since after-school jobs were in most circumstances against school rules. She was taken hostage by an escaped prisoner while working there. Dark Yugi rescued her.[2]

Anzu was eventually fired after punching a customer, who touched her rump.[3]

Anzu Mazaki got a job at Burger World, which she kept secret since after-school jobs were against school rules. Her friend, Miho Nosaka, secretly followed her here, when she was worried Anzu might be dating for pay, but wound up also getting a job there. The next day, Hiroto Honda followed Anzu and Miho because he worried that Miho was dating for pay. According to Miho, Honda started working there too, so he could buy lots of presents for Miho with his salary.[4]

A pervert took a picture of Téa Gardner working at Burgerpalooza and told her to come to the school gym equipment room unless she wanted the photo sent to the school, since it was against the rules for students to work at Domino High School without a special condition. She arrived, expecting to find Joey and Yugi (the only two people from school who knew her secret) but found the mugger with a video camera. He told her to do what he said if she did not want the picture to come out.[1]