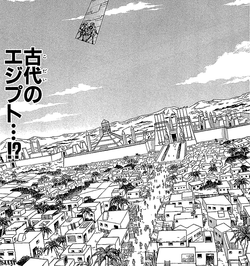 The World of Memories, including its entrance in the sky from Yami Yugi's soul room

The world was used as the setting for the Shadow RPG.[2]

The World of Memories exists inside the Millennium Puzzle. It can be accessed through Yami Yugi's soul room via a particular door.

The world is built from the memories of Atem and Zorc. Atem could exist in the world up until the point where his memories ended.

People could exist in the world for different reasons:

Bakura Ryou constructed a tabletop diorama of the ancient Egyptian city where the world is set. Yami Bakura and Yami Yugi used this as their game board when they played the Shadow RPG. Events conducted at the table could directly affect the World of Memories.

When Yami Yugi completed all his tasks and presented the Egyptian Gods to the Tablet of Lost Memories, his soul got transported to a table playing the Dark RPG against Yami Bakura, while simultaneously entered the World of Memories, entered the body of his past self, and relived through the events that happened 3,000 years ago. In the anime, Yami Bakura also entered the Memory World, and entered the body of his past self to regain his memories as the Thief King and fight against Pharaoh Atem, while yet simultaneously playing the Dark RPG with Yami Yugi.

Yugi, his friends, and Shadi (Bobasa in the manga) entered the Puzzle in an attempt to find the "true door" and enter the World of Memories. In the manga, a fragment of Dark Bakura's soul spied on Yugi and his friends. Yugi eventually entered the World of Memories, and in the manga, Dark Bakura secretly followed them inside. In the anime they found Bakura's shadow behind a door, who turned into Zorc and tried to kill them briefly.

Bakura's goal was to return Zorc Necrophades from the Millennium Puzzle, and Yami Yugi's goal was to defeat Bakura and keep his friends safe. Bakura was eventually successful in Zorc's resurrection. However, with the help of his present-day friends, Yami relearned his true name, Atem, and, rather than sealing Zorc and himself within the Puzzle, he destroyed Zorc, which destroyed Yami Bakura as well. Since it reached the point where his memories ended, Yami had to leave the World of Memories. However, this time he relinquished his power over the land to his cousin, Seto, and did not shatter the Millennium Pendant.