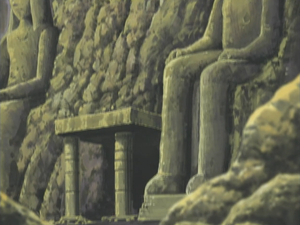 Ra's hiding place is a location in Yu-Gi-Oh! anime in the Valley of the Kings, where the card "The Winged Dragon of Ra" was hidden.

Maximillion Pegasus created the Egyptian God cards, but could not control them and feared their power. So he entrusted the Egyptian Supreme Council of Antiquities with hiding the cards[1] in different locations in the Valley of the Kings.

Marik Ishtar learned of the location of the God cards. Using the Millennium Rod, he controlled the mind of someone from the Supreme Council of Antiquities, forcing him to lead him to the hiding place of "The Winged Dragon of Ra". Once there, he uncovered a safe and Marik forced him to enter the code. As Marik left the hiding place with the card, he was confronted by his sister, Ishizu Ishtar, who also worked for the council. She warned him that he was betraying their family and that she could not let him pass. However Marik produced the Millennium Rod[2] and Ishizu flinched. When she looked back, Marik had disappeared.[3]