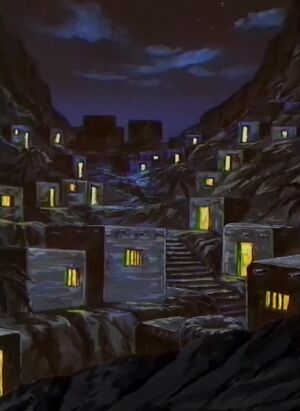 Kul Elna before its destruction

Kul Elna (クル・エルナ) was a village where Aknadin created the 7 Millennium Items, through the sacrifice of 99 human souls.

Kul Elna was once a village of thieves and criminals, and was chosen by Aknadin for that very reason. The requirements of the Dark Spell necessary to forge the Millennium Items included the sacrifice of 99 human souls, so Aknadin chose the darkest place in the Kingdom of Egypt in order to give power to the Items.[1] In the process, all the village's inhabitants were sacrificed and the village destroyed, with Aknadin apparently the only one who knew the village's location.

There was, however, one survivor among Kul Elna's population: Thief King Bakura. The process would also result in the creation of Diabound, created by the extinct villagers' desire for revenge. Bakura would, fittingly, control it in order to avenge his slaughtered villagers.

In the Yu-Gi-Oh! GX manga, Tragoedia is also another survivor of Kul Elna, as he was not at the village at the time of the attack. However, after learning about the massacre that decimated his village, his hatred and anger led to the creation of an extremely corrupted and powerful ka, that being Tragoedia.

Dawn of the Duel events[edit] 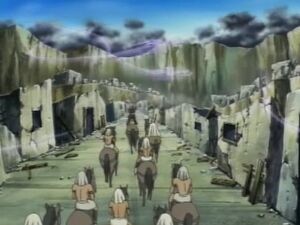 Kul Elna many years after its destruction, as it appears when visited by Pharaoh Atem in search of Thief King Bakura (Ep.209)

In the Dawn of the Duel (Millennium World) story arc, Bakura blames Atem's father, Aknamkanon, for destroying his village. The evil in his heart was so great the Sacred Guardians could not contain the beast inside. Later on, Pharaoh Atem confronts Bakura at Kul Elna in the hope of retrieving the Millennium Items he stole.[2] Bakura summons forth the spirits of Kul Elna to protect his monster "Diabound", and attempts to destroy Atem by sending the inhabitants' spirits into his body. However, Mahad appears as "Dark Magician", managing to protect the Pharaoh and destroy Bakura's Diabound with the help of Mana and "Dark Magician Girl".

However, Aknadin comes in and freezes them in time (which was really Yami Bakura using his ability to control the "Sands of Time"). Aknadin then puts all seven Millennium items in the Millennium Stone, bringing forth the soul of Zorc Necrophades, who rewards him by transforming him into the "Shadow Magus".

Kul Elna might have been based on the real-world location "el-Qurna" (شيخعبدالقرنة), which was considered as a village of grave robbers in the past. The village itself lay on the foot of the Thebani mountains, near the Theban Necropolis.

It is also likely that Kul Elna is connected to the ancient city of Set Ma'at, or "Deir el-Medina" (دير المدينة‎), which was a city of "grave robbers descended from the royal tomb builders," just like Kul Elna was [3].