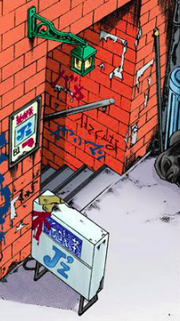 J'z is a café in the Yu-Gi-Oh! manga, located in Domino City. Hirutani's gang often hang out there.

When Jonouchi was forced to rejoin Hirutani's gang, they took him to J'z after Yugi's failed attempt to get Jonouchi to leave the gang. Yugi, Honda and Anzu overheard where the gang were going and followed them there after agreeing Jonouchi couldn't have willingly rejoined the gang.[1]

One of the gangsters left the café. In the Japanese version, he was complaining about the American-style cafés Hirutani insisted on using. In the English version, he had to leave to buy foreign cigarettes for Hirutani. Honda followed him and interrogated him into saying why Jonouchi had rejoined the gang.[1]

Inside J'z, Jonouchi got mad at one of the gangsters for hitting Yugi earlier and got into a fight. When Honda arrived at the café, to get Jonouchi to leave the gang, he found they had left except for the guy who hit Yugi, who was now unconscious.[1][2]

The outside of the café is covered in graffiti, which is left untranslated in the English manga. The graffiti on the wall reads "fool" (バカ, baka), "do not enter" (入ってくんな, haitte kunna) and "slut" (やりマン, yariman). The sign which originally read "pure café" (純喫茶, junkissa) was altered to read "impure café" (不純喫茶, fujunkissa).[1]