"The Wild Gang (Part 1)" is the eleventh chapter of the Yu-Gi-Oh! manga.

After Jonouchi misses a day of school, Yugi, Anzu and Honda check it out and find Jonouchi is now hanging out with Hirutani's gang.

Like always, Yugi got on the bus, arrived at school at 8:20 and greeted everyone. Unlike always, Jonouchi's desk was empty that day. Honda starts to worry and says that they must solve this mystery. The others may find it hard to believe, Honda says, but in all of high school, he doesn't remember Jonouchi ever skipping class; He always gets an A in P.E., but of course flunks in everything else. Yugi asks if Honda knows what's going on, but he hasn't heard from Jonouchi at all. Although she hates to admit it, Anzu says that it's kind of lonely without him. Honda suggest they go by Jonouchi's place after school. Yugi agrees, as does Anzu, who has no work today. 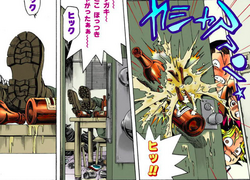 Jonouchi's father throws the bottle at the door.

The three of them arrive at Jonouchi's apartment building. Although Honda has known Jonouchi since middle school, he's only been here once before.

They make their way to the apartment and knock on the door. When nobody responds, Honda checks to see if the door is open and peers inside. Suddenly a bottle of alcohol smashes off the door and they hear a man yell "Hey! You brat! Where ya been the last two days!" The three run off scared and Honda tells them that that was Jonouchi's father and he's the reason Jonouchi never brings friends over. From that visit they find out that Jonouchi has been missing for two days and decide to search for him 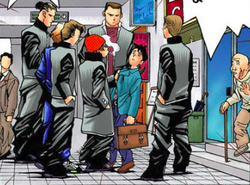 The Rintama guys mugging someone.

The three search Jonouchi's usual hangouts, but to no avail. Honda suggests that Yugi and Anzu head home before it gets dark and he'll keep searching. Yugi and Anzu agree, but suddenly they hear a noise and turn to see a group of boys in Rintama school uniforms mugging someone outside the American Club. Honda recognizes the uniforms and says that they're trouble, so it's best they leave. However Yugi spots Jonouchi among the Rintama boys. 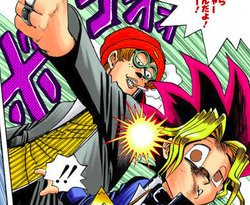 One of the gangsters hits Yugi.

The Rintama gang leave for J'z, but Yugi chases after them asking Jonouchi what he's doing hanging out with people like them. One of the gangsters turns and asks Jonouchi if he knows this kid. Jonouchi denies knowing Yugi and suggests they get moving. Yugi starts to persist and the ringleader of the gang tells Jonouchi that he's too soft, letting kids like that follow him around at Domino High School, so he should have went to Rintama with the rest of them. Honda recognizes the leader as Hirutani, someone Jonouchi used to hang out with it, but is surprised to see Jonouchi back with him. Yugi pleas with Jonouchi to come home with him. The first gangster gets annoyed and punches Yugi, telling him to shut up. In the Japanese version, he threatens Yugi, saying he'll kill him if he makes any more noise. In the English version, he says if he sees him again, he'll cut off his hair and feed it to him. Honda helps Yugi up, while Honda and Anzu shout after Jonouchi in disgust.

Afterwards Anzu tends to Yugi's wound, while Honda tells them about Jonouchi's history with Hirutani. Back in middle school, Jonouchi hung out in Hirutani's gang and would pick fights with other gangs, even ones from high schools. In the English version, Honda also mentions that Jonouchi developed a long record and was almost sent to jail. In the Japanese Honda mentions how the gang would pick on weaker people, while in the English he says that Jonouchi would at least stick up for younger kids and would never beat-up people weaker people. Honda wonders if Jonouchi is ever coming back. Yugi doubts that Jonouchi has changed and Honda agrees; Jonouchi may not be a genius, but he wouldn't treat his old friends that way. They agree to go look for him again. Remembering the gang say something about going to J'z, they decide to look there. 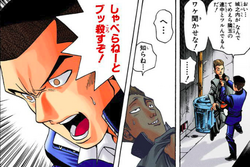 Honda interrogates one of Hirutani's minions.

Outside J'z, they spot one of the gangsters is alone, complaining about the American style bars Hirutani insists on them going to. (In the English version, he was out looking for foreign cigarettes for Hirutani.) Yugi and Anzu stand back, while Honda follows him for a while. Honda attacks him and drags him into an alley, demanding to know why Jonouchi is hanging out with them. He says he doesn't know, but Honda starts to threaten him, so he agrees to talk. 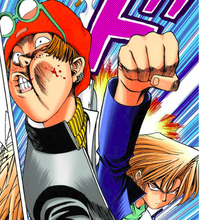 Inside J'z, Hirutani compliments Jonouchi on joining them and makes plans to cause trouble like old times. The gangster who punched Yugi earlier, realizes Hirutani is out of cigarettes and offers Hirutani one of his. After lighting it, he notices Jonouchi looking at him funny. He asks Jonouchi what's up and thinks to himself that Hirutani is trying to expand his gang and even brought back that disrespectful jerk, Jonouchi, Jonouchi refused at first, but his face went pale after Hirutani issued a warning; if Jonouchi didn't join Hirutani would beat-up the kids in his class one-by-one.

Jonouchi stands up and tells the gangster that he can't forgive him. Jonouchi punches him hard, knocking him across the room as punishment for hitting his friend earlier. Hirutani is glad to see Jonouchi get that old look back in his eyes, but since it was aimed at them, he orders the rest of the gang to hold Jonouchi down, as he needs to be taught a lesson.

Outside, Honda, Yugi and Anzu are rushing away from the now beaten-up gangster in order to save Jonouchi.

In Toei Animation's Yu-Gi-Oh! series, episode 9, ""Explosion - Ultimate Yo-Yo Technique"" is based on this and Duel 12 amalgamated with Duels 48 and 49.