"Attack from the Deep", known as "The Sea Attacks!!" in the Japanese version, is the seventy-second chapter of the Yu-Gi-Oh! manga. In its first English printing, it was numbered as the thirteenth chapter of Yu-Gi-Oh! Duelist. In the 3-in-1 edition, its number was changed to match the original Japanese printing.

As Dark Yugi and Kajiki continue their Duel, Dark Yugi looks for a way to combat Kajiki's "Sea Stealth" strategy.

Dark Yugi is just after witnessing Kajiki's "Sea Stealth Attack". Dark Yugi's had seen the monster emerge from the water as it attacked and think that Dark Yugi is unable to fight back if the enemy is underwater. Kajiki thinks to himself that this is just the beginning and Dark Yugi has yet to see the true terror of the sea. 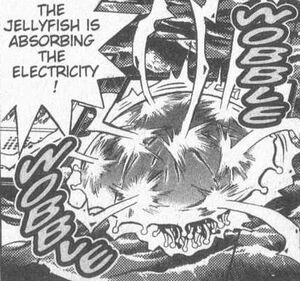 Kajiki urges Dark Yugi to bring out his next monster. Unable to see what he's fighting, Dark Yugi plays "Feral Imp" in Defense Mode, thinking it is his best move and plans on teaching Kajiki a lesson next turn. However Kajiki sees what he is planning and Summons "Jellyfish" in Defense Mode. Dark Yugi suspiciously notes that unlike "Devil Kraken", "Jellyfish" isn't underwater. He equips "Horn of the Unicorn" to "Feral Imp" and switches it to Attack Mode. Bakura sees what Dark Yugi's plan is. He explains that Kajiki's monsters being water is a weakness as well as a strength and that Dark Yugi is going to use electricity to attack the water itself. Using electricity from "Horn of the Unicorn", "Feral Imp" attacks the water. However "Jellyfish" absorbs the electricity like a lightning rod and becomes stronger as a result. "Feral Imp" loses its ATK increase from "Horn of the Unicorn" and is destroyed in battle by "Devil Kraken", reducing Dark Yugi's Life Points to 1480.

Kajiki laughs about how nobody can defeat him at sea. Dark Yugi admits that he is strong and cannot see any holes in his attack or defense. He wonders if there is any way to shatter the gigantic immeasurable fortress of water that is the ocean. For now, he thinks that his strategy will have to be to fall back as far as he can. He Summons "Silver Fang" and activates "Mystical moon" to make him "savage". This increases its ATK and DEF from 1200 and 800 to 1560 and 1040. Kajiki laughs that he's only wasting his Life Points with that kind of card and the he can't overcome the power of the sea. 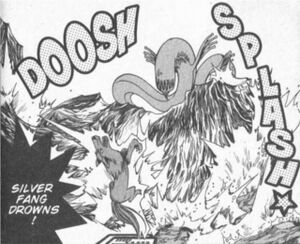 Kajiki Summons "Leviathan" and says that it shall show Dark Yugi the true terror of the sea. Its ATK and DEF rise to 2340 and 1950 due to its Field Power Source. Dark Yugi recognizes the name "Leviathan" as belonging to the dragon god of the sea. Kajiki explains that it is customary for those who live off the sea to pray to the sea god before going out to sea because those who anger him shall feel his wrath. "Leviathan" uses its "The Wrath of Leviathan" attack to drown "Silver Fang" in a tidal wave, dropping Dark Yugi to 340 Life Points. Kajiki laughs that the attack's sole intention wasn't to defeat Dark Yugi's monster and directs him to the field, which is now 95% Sea due to the flooding. 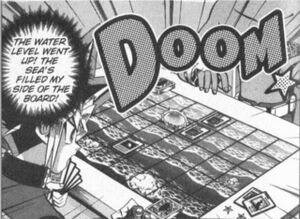 Kajiki bets that Dark Yugi doesn't have a single Water monster in his Deck and according to the new rules, if he's unable to Summon a monster on his turn, he'll lose. Kajiki notices that "Leviathan" normally doesn't cover this much of the board when he attacks with it, but he doesn't complain about it.

Dark Yugi begins his turn and as his last gamble plays "Giant Soldier of Stone" in Defense Mode on the 5% remaining Wasteland. The Field Power Source raises its DEF from 2000 to 2600. Dark Yugi ends his turn. 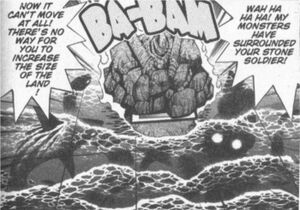 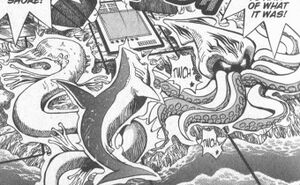 As Kajiki begins to celebrate winning early, Dark Yugi laughs a little and says that he'd been waiting for this moment. Kajiki is astonished and says that there is nothing he can do. However Dark Yugi switches "Giant Soldier of Stone" to Attack Mode. Kajiki reminds him that the other monsters are hidden underwater, so he can't attack them. Dark Yugi explains that he didn't say he was going to attack Kajiki's monsters and reveals that his target is his own "Mystical moon". Using its "Rock-Crushing Sword" attack, "Giant Soldier of Stone" shattered the moon. This caused some of the water on Dark Yugi's side of the field to pull away. He explained that the gravitational pull of "Mystic moon" had been raising the water level, like how the real moon affects the tide. It had enhanced the tide from "Leviathan" and now that it's gone, that tide is reduced to half. This left Kajiki's monsters stranded on the shore.

Finally Dark Yugi uses "Curse of Dragon" in combination with "Burning Land" to take out Kajiki's monsters and drop his Life Points to 0.

Kajiki is gracious in defeat and compliments Dark Yugi, who says that Kajiki isn't too bad himself. After giving Dark Yugi two of his Star Chips, Kajiki still has one, keeping him in the game, still giving him a chance to win the money for a boat. The two players shake hands and agree to do their best.

"Feral Imp" attacks the Ocean with electricity, but "Jellyfish" absorbs the electricity (Feral Imp: 1300 ATK) and becomes stronger as a result.

"Leviathan Dragon" attacks and destroys "Silver Fang" (Dark Yugi: 1480 → 340 Life Points). This floods some of Dark Yugi's side of the field, replacing Wasteland terrain with Ocean terrain. Due to the gravitational pull from "Mystical moon", the amount of the field that got flooded was doubled, leaving Dark Yugi with just one Wasteland zone.

Dark Yugi Summons "Curse of Dragon" and uses it in combination with "Burning Land" to destroy Kajiki's stranded monsters and drop his Life Points to 0.

The end of episode 7 of the Yu-Gi-Oh! anime, "Attack from the Deep", is based on this chapter. There are a number of differences including: