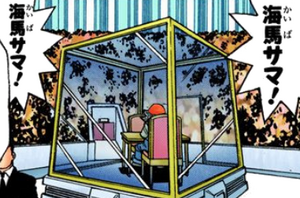 A Battle Box is a small, clear box that surrounds a table and two chairs. It is used to play Duel Monsters in the Death-T and Duelist Kingdom arcs in the manga, created by Seto Kaiba. Any card played inside the Battle Box is brought to life with holographic technology. These devices were invented by Industrial Illusions, Inc. and were later replaced by the Duel Disk, KaibaCorp's invention in Battle City.

In the anime, Seto Kaiba invented Dueling Arenas instead. Zigfried von Schroeder invented something similar to Battle Boxes, but before he could present his idea to Maximillion Pegasus, Kaiba had already made a business deal with Pegasus to produce the Dueling Arenas.