Zigfried von Schroeder is a character in the Yu-Gi-Oh! anime and the main antagonist of the Grand Championship arc. In both incarnations, his name is derived from the name of Siegfried, a character in the opera, Der Ring des Nibelungen (The Ring of Nibelung).

He is the CEO of Schroeder Corp, a rival of KaibaCorp. As the champion of Europe, he participates in Kaiba's KC Grand Championship under the name "Zigfried Lloyd" (ジーク・ロイド Jīku Roido "Sieg Lloyd"). He is Leon von Schroeder's older brother. 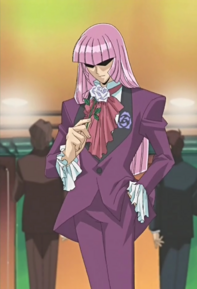 Zigfried appears in a palatinate purple suit with a black lapel which shows the Schroeder Corp's insigna at the left side. According to Seto Kaiba, Zigfried wears 'expensive' black patent-leather shoes. Around his neck he wears a cerise colored frilled jabot adorned with a purple brooch. On his left wrist he carries a golden watch with him. He has aqua colored eyes. His long pink hair is waist-length and is heavily criticized by Kaiba, Joey, Weevil and Rex because of it's unusual color and shape. Zigfried likes to play with roses, like throwing them at his enemies at the end of a Duel in a very conceited way which emphasizes his pretentious behavior. In his childhood and teenage years his hair is darker, he wears a pink suit with a periwinkle colored collar, a purple ribbon and a blue brooch. Zigfried is depicted as a handsome nobleman who talks and walks gently wearing fashionable clothes. He has also been introduced as the 'Untouchable Emperor of Europe' by Roland since he is the champion Duelist of Europe, as well as a 'trend setter' because of his fancy clothes.

He comes across as arrogant and vain, but he has a kind side, as evidenced by how regretful he feels at the end of the arc for lying to his brother Leon, so Leon would help him with his plot. He genuinely loves his brother, as Seto loves Mokuba. Zigfried calls some people 'Herr' which means 'Mister' in German (in the Japanese version he only calls Kaiba 'Mister'). He is shown to enjoy the luxuries of a wealthy life, such as a private lavender jet.

In the Japanese version, he also believes that he is very lucky and goddess of victory (or fate) always chooses him. 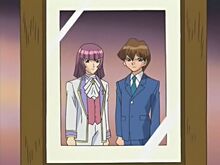 Zigfried was born as a new successor of Schroeder Corp. His childhood and early years were affected by educational abuse very similar to Seto Kaibas past. Because of this educational wounding in his youth Zigfried created an inner compulsion to be successful. He and Kaiba first met at a business party at the age of 8. Zigfried's father introduced his son as a child prodigy, who has an unbelievable talent for computer programming. Zigfried managed to bypass Kaiba Corp's security system and played with the power supply to demonstrate his genius, impressing Kaiba at that time. When Gozaburo Kaiba announced the new company deal belongs to Kaiba Corporation, both Zigfried and his father were left stunned. This event triggered Zigfried, who promised himself to defeat Kaiba Corporation someday. 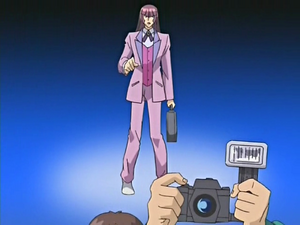 A devastated Zigfried, who arrived too late as Kaiba and Pegasus make their business deal

His father was driven mad after so many defeats against KaibaCorp, so Zigfried becomes the new CEO of Schroeder Corp. He first gets rid of military department and enters the Game Industry, but in a meeting, one of the Corp's executives says that Seto Kaiba also became the new CEO of KaibaCorp and they entered the Game Industry too. Zigfried thinks that is a lie at first but then he realizes that it's true and works harder to surpass Kaiba this time. Finally he invents 'Holographic Virtual Duel System' for Duel Monsters Game. He goes to Industrial Illusions to make a business deal with Maximillion Pegasus. However, because he was late, Seto Kaiba makes the deal instead, which makes him even more angry at him. He seeks to take down KaibaCorp as revenge because he feels that Seto Kaiba stole his plans for holographic Dueling technology. (In the Japanese version, it is because Kaiba's project was accepted before he arrived to display his own technology to Industrial Illusions.) 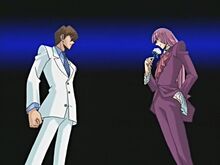 Zigfried and Kaiba meet again before the tournament.

After years, Zigfried hears that KaibaCorp is making a new tournament in the new Kaiba Land. With his talent on programs, he hacks the main computer sytem and plays with security system, causing Mokuba, Yugi and his friends locked inside of Kaiba Dome. He also recognizes Yugi and he says that he is the champion of Battle City tournament. After Yugi defeats the KC DuelTek 760 in a Duel, everything in the dome returned to normal, but Zigfried also joins the tournament with a fake name, 'Zigfried Lloyd'. He arrives the Kaiba Hotel late and meets again with Kaiba, without Kaiba recognizing him. 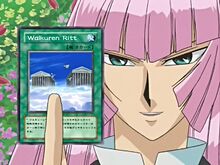 Zigfried plays "Ride of the Valkyries", named as the German "Walkuren Ritt" in the Japanese version.

After the tournament begins, Kaiba starts to watch the contestants to see do they make anything suspicious. Zigfried predicts that and tries to looks especially suspicious to him. He was scheduled to Duel Fortune Salim at the Flower Clock. However, Rex Raptor and Weevil Underwood impersonates him after knocking Salim out, but are caught by Mokuba. Zigfried persuades Mokuba to let them Duel him. He looks at the security camera and says that Kaiba is about to see his true power. He defeats them in 1 turn with "Ride of the Valkyries". In his later Duel against Joey, he looks at the camera several times again to look suspicious. Zigfried also sabotages the main computer again, this time causing the park vehicles work too fast. He thinks that if Kaiba couldn't handle this, he is not a big opponent at all, but Kaiba stops the virus. He also starts to recognize Zigfried a little by remembering the past. Zigfried uses his Goddess Magic Cards and "Nibelung's Ring" strategy to defeat Joey. He then defeats Balfry Ginger in the semifinals. 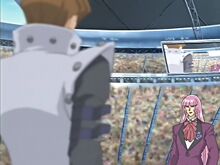 Zigfried says that Kaiba disqualifies him because he is scared of him and now whole world knows this.

Kaiba starts to search about Zigfried and founds that he entered the tournament with a fake name and is the responsible of these troubles. When it comes to the finals where Zigfried is about to Duel Leon, Kaiba intervenes. He says the winner is Leon and Zigfried has been disqualified, but Zigfried says that Kaiba is doing this because he fears of his power. Since he said this while the whole world is watching this, Kaiba makes a deal with him. They'll Duel, and if Zigfried wins he'll stay in the tournament but if he loses he will be disqualified. In the Duel Zigfried says why he came here and what is his plan, and says that if Kaiba loses his company, Industrial Illusions will not work with Kaiba anymore, and Pegasus will make a new deal with Zigfried himself. Despite the fact that Zigfried used the same strategy against Kaiba, he defeats Zigfried. Kaiba humiliates him and tells Roland to let him go, saying he can't do anything anymore. 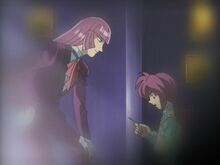 Before the final match of Grand Championship begins, Zigfried gives "Golden Castle of Stromberg" to Leon, says that if he plays this card all Schroeder family will be thankful to him. After Duel begins, Kaiba learns that Leon Wilson has also entered with a fake name too and he is actually Zigfried's brother, namely Leon von Schroeder. Zigfried appears and says that his real plan was actually to look suspicious and receive attention while Leon goes straight to the finals. Though Kaiba wanted to stop this Duel, he also knew that if he cancel the final Duel the whole tournament would be nothing. He does nothing, thinking that Leon doesn't have a chance against the King of Games, Yugi Muto. But Zigfried doesn't agree since he gave "Golden Castle of Stromgberg" to Leon. Leon finally draws the "Castle" during the Duel and activates it. Kaiba is surprised and says that card is illegal, meaning that it shouldn't work on the Duel Disk. Zigfried says that he didn't enter the main computer just for hacking, he also rewrote and made the card legal for the Duel Disks. Leon learns that he is cheating and both he and Yugi try to destroy it but they can't. Zigfried says that this card is also the biggest virus he made and it will remove all KaibaCorp files if it's not destroyed. Kaiba then goes back to the center to stop it while Zigfried enjoys the Duel. Because of the card's own effect, (when Yugi only have one card in his Deck and can't send half of it to the Graveyard) Stromberg destroys itself. But Zigfried still believes he won because Yugi has only 1 card on his deck. Though Leon tries to surrender, Yugi says he shouldn't and continue the Duel. In his last turn, Yugi makes a perfect combo and manages to defeat Leon. 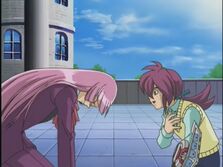 Leon encourages Zigfried to not give up.

Zigfried says that he still didn't lose because the Golden Castle's virus removed a lot of KaibaCorp's files, but Kaiba appears and says he already saved them because he backed up all the files from beginning. Zigfried gets shocked and Leon tells him to stop, Zigfried gives up and says he'll never defeat Kaiba. He also feels sorry for what he did to Leon, but Leon still loves him and tells him that he can still be succeed without defeating Kaiba. With Leon encouraging Zigfried, he thanks Leon and hugs him. 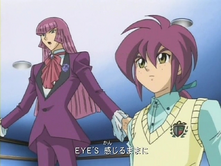 Zigfried and Leon talking to Pegasus in the last episode.

In the last Japanese ending he and Leon talk and try to make a deal with Pegasus, Pegasus looks unwilling at first, but after a speech by Leon, he accepts the deal, which makes both Zigfried and Leon very happy at last.

Zigfried plays a "Valkyrie" Deck, consisting of cards based on Norse mythology and named after characters and concepts from Richard Wagner's Der Ring des Nibelungen. His signature move is to Summon all his "Valkyrie" monsters at once using "Ride of the Valkyries" to perform a One Turn Kill. Zigfried otherwise combines his three "Goddess" Spell Cards with "Nibelung's Ring" to gradually deplete his opponent's Deck, banishing their monsters before they can play them. He also uses several stall and drawing cards to buy time for him to draw "Ride of the Valkyries" into his hand.