Gansley, known as Konosuke Oshita in the Japanese version, is the former Vice-President of Business Strategy of KaibaCorp and the leader/founder of the Big Five where he is the oldest of the group.

Gansley is a fair skinned old man with gray hair, who is partially bald. He is short, fat, and carries a cane. He wears a double-breasted tan suit. In the Virtual World, he takes the appearance of Deepsea Warrior. He bears some resemblance to the historical figure of Ciceron, this may or not may be intentional.

Gansley is obsessed with business, and as such refers to his monsters as employees. He often flaunts his knowledge of business and believes that his corporate experience gives him an advantage when it comes to Dueling. He is shown to have been unethical in his career, often firing employees as he pleased. In the dub, he gives Yugi Muto advice on business, claiming his own career as a corporate tycoon started as a child, where he stole a lemonade stand from a neighbor, and expanded that into the largest distributor of frozen canned lemonade in his region.

In the Japanese version, he quotes various warlords and philosophers on how to build a successful army.

Gansley also enjoys making people suffer. This is shown when he had the chance of defeating Yami Yugi, but chose to "draw it out as long as possible." Gansley's choice of prolonging his victory ended in his own defeat.

Gansley worked as vice-president of business strategy at KaibaCorp. Gansley, along with 4 other KaibaCorp employees formed a group known as the Big Five.

Seto Kaiba, the adoptive son of the head of KaibaCorp, Gozaburo Kaiba, convinced the Big Five that Gozaburo was mistreating them and that Setup would help restore them to their former power. The Big Five agreed, and thus bought 49% of KaibaCorp. Combined with 2% that Gozaburo had previously given to Seto for a test to prove his business skill, the Big Five voted out Gozaburo and voted in Seto as the president of the company.

However, Seto quickly backed out on their deal, left them of their power and leaving the Big Five little more than figureheads and consultants. Furious over their betrayal, the Big Five struck a deal with the president of Industrial Illusions, Maximillion Pegasus in an attempt to overthrow Seto. If Pegasus defeated Seto and Yugi Muto in Duels, then they will use their 49% to vote Pegasus into power of the company by kidnapping Mokuba Kaiba, who had been entrusted with the security codes to the two percent the Big Five needed.

The Big Five and Pegasus' plan failed, after Pegasus was defeated by Yugi. In the manga, Gansley and the Big Five were fired by Seto and were never seen again.

However Kaiba was rescued by Mokuba, Yugi, Joey, and Mai Valentine. The Big Five reprogrammed the game and set the "Mythic Dragon" as the final boss. However, it was defeated by Yugi and Kaiba's "Dragon Master Knight".

After losing in Legendary Heroes, the Big Five got trapped in the virtual world instead of Kaiba. Here they met up with Noah Kaiba. Having Seto as a common enemy, they made plans for revenge.

During the Battle City tournament, Noah had the KaibaCorp blimp sucked into an undersea fortress, where the virtual world's main servers are. They forced Seto and Mokuba Kaiba, along with Yugi and his friends into the virtual world again. Using an altered set of Duel Monsters rules, involving Deck Masters, the Big Five Dueled their enemies in the hopes of stealing their bodies to escape the virtual reality. 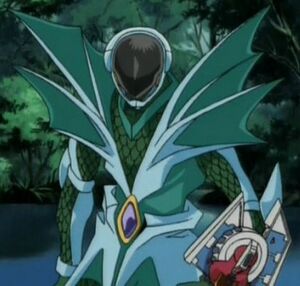 Gansley took the form of "Deepsea Warrior", which he used as his Deck Master. He chose to Duel Yami Yugi, and claimed to have perfected a strategy to defeat him. As Yami Yugi constructed a Deck, Gansley misinterpreted Yami Yugi saying "Kuriboh", as him choosing "Kuriboh" as his Deck Master. He refused to let the Pharaoh change his Deck Master after that. Exploiting his Deck Master's ability to deflect attacks back at Yami Yugi, Gansley managed to get the upper hand against Yami Yugi and was about to win, but Yugi took control and used "Kuriboh's" Deck Master effect to save them. Yami then used "Kuriboh", combined with "Rainbow Blessing", allowing him to bypass Gansley's monsters and special ability to directly attack him with "Swift Gaia the Fierce Knight", defeating him.

Gansley, along with Crump, Johnson, and Leichter, having failed to win their targets' bodies, went behind Noah's back and attempted to steal the bodies. They chased down Duke Devlin, Serenity Wheeler, and Joey. As they argue over who gets which bodies, Noah makes contact and told them off. Since Nezbitt didn't rightfully take Tristan Taylor's body, Noah allowed the Big Five to share Tristan's body in order to Duel Yugi. Should they win, they would get their freedom.

The Big Five faced Yugi and Joey, using Tristan's body. The 5 each switched control and Deck Master throughout the Duel. Gansley only took full control for 1 turn. Towards the end of the Duel, the Big Five used "Dragon Revival Ritual" to combine their Deck Masters into the "Mythic Dragon" again. The dragon was destroyed by Yugi and Joey's "Mirage Knight", but the Big 5 used "A Deal with Dark Ruler" to make "Berserk Dragon" their Deck Master. Ultimately, it was destroyed by "Dark Magician Knight", costing them the Duel.

Noah refused to give the Big Five any more chances. In the original version, Noah deleted Gansley along with the other Big Five members. In the dub, Noah imprisoned the Big Five in the different corners of the Virtual World, which were destroyed when the Virtual World was destroyed. Gansley's fate is unknown. He later appeared in a flashback.

Gansley uses a Reptile/WATER Deck that relies on Summoning many monsters to use the ability of his Deck Master "Deepsea Warrior", called "Reflector Hole", which negates an opposing attack and inflicts damage to the opponent equal to the attacking monster's ATK at a cost of two Tributes. Gansley further uses control cards to limit his opponent's options, either depleting their hand or limiting the number of monsters they can maintain on the field.