Valon (ヴァロン Varon) is a character in the Yu-Gi-Oh! anime and one of the main antagonists of the Waking the Dragons arc. He is one of Dartz's three most trusted henchmen. He often quarrels with Alister, as evidenced by the one scene where they actually converse and end up arguing because of each one's motives to go after their targets. He and Rafael seem to get along fine. He is responsible for leading Mai Valentine to Dartz.

In the English dub, Valon has a heavily stylized Cockney accent, which was greatly mistaken for an Australian one. 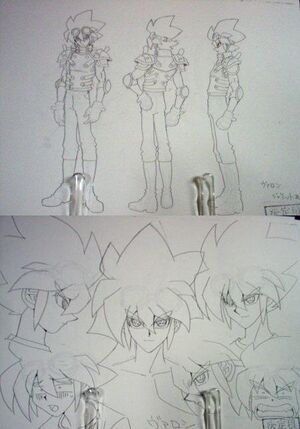 Valon's design incorporates multiple layers of clothing and a wide range of expressions. Depicted here is the duelist in "Doma Swordsman" regalia from front, side, and rear views and alongside views of his head from different angles.

Valon's usual outfit consists of typical biker clothing including goggles, gloves and padding on his shoulders and elbows. His thick head of chocolate brown hair is styled in thick flares out in all directions and possesses crystal blue eyes and a tanned complexion. Valon wears his Orichalcos Stone in a ring on his middle finger on his right hand. He carries a Chaos Duel Disk on his left wrist.

The names of Valon and his fellows (known as Doma's Three Swordsman in the Japanese version) in addition to Dartz himself are drawn from The Three Musketeers; Valon's name is derived from Porthos, Baron du Vallon de Bracieux de Pierrefonds. The name Valon is of Albanian origin, and it means "seething."

Valon in an alley holding a length of pipe, the bodies of the thugs on the ground around him.

Valon is shown as a child who loves getting into fights. He appears to be an orphan, but is looked after by a kind nun. One day she was in the church with Valon cleaning the wounds he had gotten from a previous fight when a group of thugs entered, telling the nun that their boss has bought the church and that they must leave. Valon is ready to fight and almost throws a punch, but the nun, smiling, grabs his wrist and shakes her head, telling him not to. That night a fire is started at the church. Valon is there and spots the thugs from earlier who are laughing about it. (The nun is also suspected to have been in the church at the time of the fire.)

Valon thinks that they are responsible and later he is seen in an alley holding a length of pipe, the bodies of the thugs on the ground around him. It is uncertain whether he killed them or not as they have been briefly seen in later scenes. (This entire sequence is from the Japanese version of the anime and is completely omitted in the dub.)

Valon in prison (or a juvenile detention center).

Valon is taken to prison (or a juvenile detention center) where he gets into more fights. Eventually he is taken to the warden (or headmaster), who tells Valon that he will let him leave if he defeats all the other prisoners on an island using "The Seal of Orichalcos". (The warden was working for Dartz.) Valon defeats all of his opponents. He is then encountered by Dartz and offered to work for him, and Valon accepts. Valon doesn't know that Dartz was the one who had the church burnt down. He actually tells Dartz that 'be careful, since one day I may end up beating cha', to which Dartz merely smiled. In the dub, Dartz had instead framed Valon for his first crime.

Valon eventually became infatuated with Mai, although she does not appear to return those feelings as strongly as he wished she would. Partly out of jealousy and partly to help Mai let go of her past, Valon Duels Joey Wheeler, whom Mai thought fondly of. In their Duel, each gains immense respect for one another, each seeing the other's devotion to protecting Mai and his refusal to be intimidated. While Mai is initially angry at Valon for taking this Duel, he refuses to let her take his place. In the final clash his drive to win is matched by the joy at facing a great opponent like Joey. However, his focus wavers when Mai (knocked off her feet by the explosion from the attacks colliding) looks at the grappling opponents, and calls out Joey's name.

Once he loses, he admits it, drops to one knee in exhaustion and remains conscious just long enough to entrust Joey with rescuing Mai from her own fears. He then collapses and the Seal takes his soul. His image appears on a tablet in Dartz's temple to signify his capture and the image shows him in the same kneeling state with a solemn expression on his face. (It is noteworthy that, for all his combativeness and defiance in the past, he and Joey are the only two characters whose soul-carvings do not depict them panicking at their imprisonment.) Mai goes to him and shows great concern for him, but quickly regains her composure and deems him as having been weak. This act is the final straw for Joey and he challenges her to a rematch to dispel the changes to her heart. Valon's soulless body, along with Mai's, is rescued by Rafael and they are both restored when Dartz is defeated. He wakes up in a seaside house and realizes that Mai was there also when he sees that she left him one of her "Cyber Harpie" cards.

He also makes a brief appearance at the end of the Grand Championship arc. He is seen during the montage after Yugi Muto's victory with the Sagrada Família in the background.[1]

He is last seen at the end of the Dawn of the Duel arc on his motorcycle looking up at the sky.[2]

Valon utilizes an Armor Deck where the monsters he Summons are equipped to his own body as a futuristic suit of power armor. His Armor cards lack ATK but have powerful effects to make up for this ranging from Magic and Trap Card negation to monster destruction to effect damage. Valon Summons them to the field in numbers using "Armor Gravitation" cards to Special Summon multiple pieces at once, then activating all their powers. "The Seal of Orichalcos" is critical to Valon's Deck, as it boosts the strength of his Armor cards and allows him to Summon more of them to make his suit of armor more powerful with additional effects. Valon has little subtlety in his moves, using few Magic and Trap Cards, and the Duels he have been involved in are extremely fierce.

Duels with Valon are far more damaging than in a normal Duel since instead of the player feeling a stinging sensation from being attacked by a hologram, they are actually physically being assaulted by him, punching and beating them as hard as he can and leaving them terribly injured.