Chris is a character in the Yu-Gi-Oh! anime. She is the princess of Atlantis; the daughter of Dartz and Iona, and the granddaughter of Ironheart. She has a pet wolf named Skye. 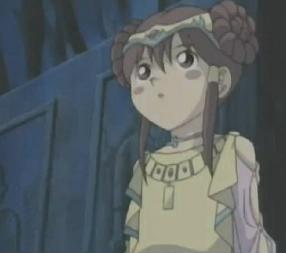 Chris' parents are Dartz and Iona, who were the king and queen of Atlantis. Chris was the princess of Atlantis before the city sank beneath the ocean waves. A few years after the Orichalcos arrived, people of Atlantis started turning into monsters, including Iona, who was then killed by Dartz. Believing people to be evil, Dartz made it his mission to wipe out the people of the city. Dartz asked Ironheart and Chris to join him, but they both refused. In response he unleashed a number of Orichalcos Soldiers on them. When Dartz was taken over by the Orichalcos, she took shelter with her grandfather Ironheart in the Realm of the Beasts. 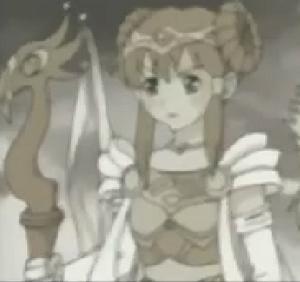 Chris during the battle of Atlantis.

Ironheart, Chris and Skye led a group of refugees from the city to the nearby mountains. Here Ironheart searched for the creatures of ancient power, the knights Timaeus, Critias and Hermos. Together they fought in a battle against Dartz. However neither side was victorious.

Chris' spirit along with Ironheart and Skye's continued to live on. They met Yami Yugi, who was chosen to wield Timaeus in his card form "Eye of Timaeus". Ironheart and Chris saved him and Téa Gardner from the wreckage of a crashed train.

Yami was unable to Summon Timaeus after he allowed Yugi's soul to be taken by playing "The Seal of Orichalcos". Ironheart and Chris worked to help Yami overcome this. They took him to a plain of lost souls, where he faced Yugi in a Duel. Afterwards when Yugi was confronted by an Orichalcos Soldier, Chris raced down on Skye's back to give him back the "Timaeus" card. However she is struck by one of Dartz's lightning bolts. She manages to hand Yami the card, before her spirit vanishes. An image of her is later seen on a stone marker alongside her grandfather and her pet wolf.

When the Pharaoh ultimately beat Dartz, Dartz was reunited with Chris in the spirit realm.