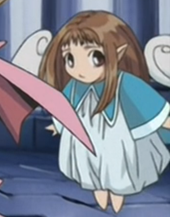 In episode 147, one of the three fairies is among the group of Duel Monster Spirits that plead with Yami and Yugi to free Timaeus and defeat Dartz.

In episode 34, one of three fairies pictured in the card appears as a spectator of Jaden Yuki's Duel against Kaibaman.

Later, in Season 3, Dancing Fairy accompanies Maiden of the Aqua in her search for a hero who can defeat The Supreme King in the alternate dimension. After Zane Truesdale and Aster Phoenix defeat two members of the Goblin Elite Attack Force, the remaining members flee from the mansion. They eventually attempt to chase down Maiden of the Aqua and Dancing Fairy. They are saved by Syrus Truesdale and Ojama Yellow, who lead them to safe hiding spot. Ojama Yellow is instantly smitten with the Dancing Fairies, and attempts to impress them any way he can. Maiden of the Aqua questions if Syrus can defeat The Supreme King, and he responds that he can't, but points them in the direction of Axel Brodie, giving her Axel's Duel Disk in the process, as the latter had left it behind in an abandoned house while fleeing from The King's forces.

They find Axel, who believes that no one is capable of defeating the Supreme King, and is still ashamed of himself for running after Jim Crocodile Cook was defeated by him. Maiden of the Aqua and the fairies continue their search. Axel witnesses the remaining members of the Goblin Elite Attack Force release a pack of flaming foxes as hunters in an an attempt to track them down. Axel returns in an attempt to save them, and the Maiden hands him back his Duel Disk. He is unable to defeat the foxes by firing cards at them as he would usually do, as they are the same attribute as the ammo he's using. The Maiden casts a spell that parallels the effect of her card, covering the battlefield in water. The foxes retreat to a small plot of land, and Axel is able to knock them into the water with several "Anchor Bind" cards, defeating them.

Axel still doubts his ability, and the Maiden and fairies depart back to their village - the last one in the dimension yet to fall to The Supreme King. Axel defeats one of the King's minions, and nearly the entire village urges him to accept the role as their commander. Axel finally agrees, and finds himself backed by Zane, Aster and a group of freed Duel Spirit prisoners. The Dancing Fairy spirits offer to aide in the search for Jesse Anderson, with Axel believing that a revelation of the latter still being alive may help snap Jaden Yuki out of The Supreme King's influence. The fairies fly around to various places, attempting to find out if anyone has seen Jesse. They eventually end up questioning Ojama Yellow, who tells them he did see Jesse in yet another attempt to impress them. Syrus and Ojama Yellow depart aboard "Kiteroid" to the King's castle. Despite Yellow's lie, he realizes that he actually did see Jesse, but didn't realize it was him at the time. Regardless, this fact does not help in Axel's fight against The King.

In episode 19, the Dancing Fairies are shown in a flashback of Luna's, in which she plays with them and many other Duel Spirits in the forest dimension. The fairies are also seen in episode 48 fleeing from the Minus Curse.

Dancing Fairy appears as an opponent in the lower area of the Order Duel World. It is initially dueled with both the player and Dancing Fairy having only 1000 Life Points, but it can be challenged to normal duels after defeating Senju of the Thousand Hands. 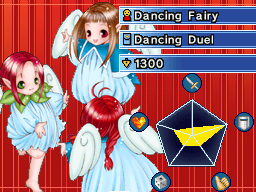