Clark Smith is the President of the Momentum Express company. He is affiliated with Iliaster and is responsible for having Dr. LeBlanc and his wife murdered. 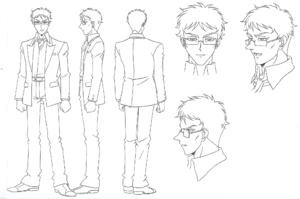 Clark met Yusei Fudo, Sherry LeBlanc and Bruno, disguised as employees from Bolten's company. He denied meeting Sherry before, when she expressed curiosity over this. He showed them a riding course, used in the testing of a new engine and the "Infinity" machine. Yusei, Sherry and Bruno swiped the access key to Infinity from Clark's office, but he returned before they had time to escape. Yusei waited for Clark, giving Bruno and Sherry time to sneak out. 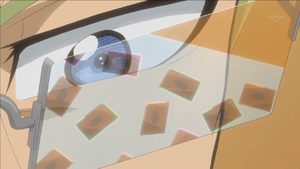 Yusei imposed a Duel, which Clark accepted under the conditions that it be a Concentration Duel and the winner takes their opponent's Deck as a prize. With no other option, Yusei accepted and Clark allowed him to go first, giving him time to gain familiarity with the rules. Clark cheated by having his cards marked in a way that was visible in their reflection on his glasses. He managed to send most of Yusei's cards to the Graveyard. However Yusei caught on to his trick and used it to his advantage in his last move, winning the Duel.

Clark admitted that he knew who Yusei was from the beginning and activated a security alarm. Yusei, Bruno and Sherry fell for Clark's trap as they tried to hide in a dimension shuttle, which Clark then used to send them through a wormhole created by Infinity. Before the shuttle was launched, Sherry realized that Momentum Express must be connected to Iliaster and asked Clark, who killed her father, Dr. LeBlanc. Clark explained Dr. LeBlanc's involvement in Infinity and blamed his death on him asking too many questions.

When the Three Emperors of Iliaster found out what Clark had done, they were displeased that he attempted to eliminate Yusei, who was a useful pawn to their plans. Consequently, they performed a falsification of history, erasing the existence of Clark and Momentum Express.

Clark uses a Geometric Knight Deck with a mill sub-theme, which he uses to abuse the special conditions of a Concentration Duel to gain advantage over his opponent.