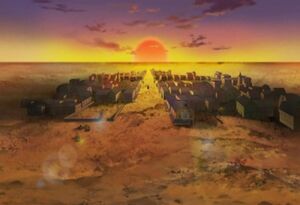 The construction of Crash Town came to be when a rare mineral, Dyne was discovered in a mountain. Dyne, which can be used to make Duel Runners, attracted people from various places to excavate it. Back then, Crash Town was constructed nearby the mountain from which the mineral came from.

The hardworking task of excavating the mountain was left to 2 individuals, Malcolm and Radley. At the time, the two of them were able to gather people, but began to force many others to work at the mountain through Duels.

The town then became ruled by such Duels. However, a town law was established that, for that reason, Duels are prohibited and can't be carried out until sunset.

Thus, such Duels take place under a high stake. Those who win can gain enormous amounts of money, alternatively the loser becomes a slave, forced to work at the mountain forever.

Due to Malcolm´s plan with Barbara, the town went under the control of his family. Malcolm wanted to change the town's name to "Barbara Town” but because Lawton conspired with Barb against Malcolm, the town was renamed "Lawton Town".

However, this did not last long as Yusei Fudo and Kalin Kessler defeated Lawton in a Duel. As a result, Sector Security took Barb and Lawton into custody and the town is renamed "Satisfaction Town" in honor of The Enforcers (named Team Satisfaction in Japanese), Kalin's former team.

It was last seen in episode 152 during the very end of a Duel between Kalin and Jack Atlas. Jack had been traveling and defeating several of his aquaintances from the past to prepare for his final Duel with Yusei to regain his title as King. Kalin notes his improvement, but says he still isn't satisfied, to which Jack wholeheartedly agrees.