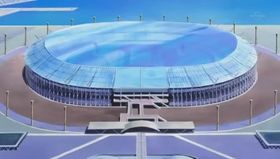 The Memorial Circuit, referred to as the Kaiba Dome in the dub as a reference to the Kaiba Dome from the original Yu-Gi-Oh!, is a stadium in New Domino City.

The stadium is a standard elliptical building. It contains a few small Duel arenas, a holographic display sphere in the center, a watchtower used by Rex Goodwin and his associates, and a track for Turbo Duels.

The Crimson Dragon over the stadium.

Yusei Fudo and Jack Atlas also faced each other here in a private Turbo Duel, in which the Crimson Dragon appeared. Yusei was then arrested on the location by Sector Security for trespassing in New Domino.

After the events of the Dark Signers, the stadium is used during the WRGP competition to promote the union of New Domino and Satellite.

The stadium is damaged during the Diablo incident, so the competition is moved to another location.

Yusei and Jack faced each other in the Memorial Circuit in a Turbo Duel in front of a large audience.

The area surrounding the Memorial Circuit is referred to as Stadium (スタジアム, Sutajiamu) in the map.

Every day, in all 3 games, the player can enter Tag Duel tournaments by talking to the Showgirl or the Race Queen in the middle of the entrance of the Memorial Circuit before nighttime.

The type of tournament hosted in the Memorial Circuit changes every day. These tournaments follow consistent rules throughout their duration, except for the Sunday tournaments.

The opponents and Decks faced during the tournaments are fixed, and they depend on the type of tournament and its difficulty level.

By winning all 5 duels in a tournament, the player will earn additional DP, and the next level for that type of tournament will be unlocked.

During Sundays, the Memorial Circuit hosts tournaments with varying random rules. The player and their partner duel against random pairs of opponents under random amounts of starting Life Points and random time limits per turn, with varying amounts of each for each duel. For each victory, the player earns 1000 DP x the number of duels won in the current streak, but if the player's team loses or ties, all the DP earned will be forfeited.

The player can quit at any point after winning a duel if they want to keep the DP they earned, but, as Sunday tournaments will automatically end after the player's team wins 10 duels, the maximum amount of DP players can earn in one tournament is 55000 DP.