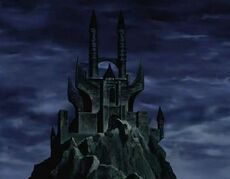 Zeman's castle is a grim hilltop structure in the Duel Monsters Spirit World. Zeman the Ape King resided here, while he was in power.

Role in the Minus Curse[edit] 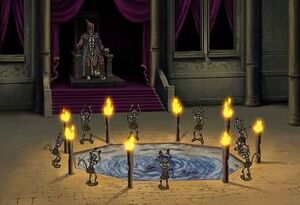 The building served as a key location for casting the Minus Curse. Inside the throne room is a large portal. The portal could be used to cast large scale Minus Curses. While performing one, a large beam is emitted from the castle. Its strength comes from the souls of Duel Monster spirits, he has already minus'd. Such spirits are sealed in stone slabs, which line his walls. The slabs resemble the spirit's corresponding Duel Monster cards, but with a negative Level.

Inside it was Ancient Fairy Dragon's prison, where Zeman had the dragon sealed in stone, but was unable to completely minus her.

When the Signer Luna came to the spirit's world in order to free Ancient Fairy Dragon, she along with Torunka and Regulus infiltrated the castle, disguised as traveling magicians, who had captured Regulus and were bringing him to Zeman.

They tried convincing Zeman that he must first unseal the Dragon, then seal both her and Regulus in order to completely minus her. Zeman initially falls for this and begins to unseal Ancient Fairy Dragon.

After Torunka accidentally blows their cover, Zeman begins to quickly reseal Ancient Fairy Dragon before she is freed. However Regulus asks Luna for the Cursed Needle as he plans to counter Zeman's negative energy with his staff. Zeman and army of monkeys are destroyed as both staffs negative power become positive resulting in a blast that destroys some parts of the castle. Some effects of the curse are undone, but the spirits remain imprisoned on stone tablets.

Once Luna and Leo defeat the Dark Signer, Devack, Torunka, who remains in the castle, informs the now freed spirits that Luna has saved them.