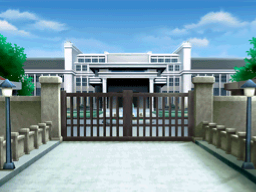 The exterior of Goodwin Mansion in Reverse of Arcadia.

Goodwin Mansion is the residence of Rex Goodwin in New Domino City. It was partly destroyed in the Signers battle with the Dark Signers.[1]

The mansion is located on an island within New Domino City, accessible by bridge. The island also contains a garden, some woodland, courts and small bodies of water.

The Stairway to the Dragon Star was hidden underground below the mansion and could be accessed using an elevator.[2] After the Dark Signers awoke the King of the Netherworld, the stairway rose through the ground piercing the island[1] and later disappeared.[3]

Shortly after Yusei Fudo and Jack Atlas' Duel, in which the Crimson Dragon appeared, Goodwin brought Jack to the mansion to show him the true face of the Public Security Maintenance Bureau. He showed him the mansion's underground, including the Stairway to the Dragon Star and told him about Iliaster, the People of the Stars and the Signers.[2]

The stairway piercing through the island.

After the Signers failed to activate the last control tower in the B.A.D. Area in time, the King of the Netherworld awoke, while at the mansion the Stairway to the Dragon Star jutted through the ground breaking through one of the buildings on the island and the condor Nazca Line appeared in the sky above the mansion. The Signers and their companions were then transported to the outside the mansion.[1]

Goodwin appeared at the top of the stairway before the Signers, where he revealed that he was a Dark Signer and used his brother Roman's amputated arm to make himself the powers of a Signer too. Goodwin then caused the stairway to rise further, destroying more of the mansion. Yusei, Jack and Crow boarded the condor lines to Turbo Duel Goodwin, who stood in the center on the stairway.[1]

After the Turbo Duel, the temple and condor Nazca Line disappeared from the mansion.[3]