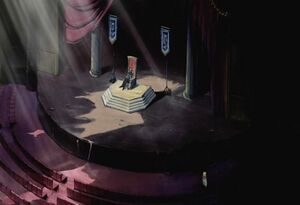 Jack, in the theater

Jack's theater is an abandoned structure in Satellite in the Yu-Gi-Oh! 5D's anime, where Jack Atlas would spend time by himself.

While aspiring to be "King", Jack would sit on a throne on the stage of the theater, before an empty audience. As he was doing this one day, he was approached by Rally Dawson, who thanked him for defending him from some thugs earlier. Rally also invited him to come and see Yusei Fudo's Duel Runner being taken for a test spin. However Jack declined, seeing himself and Yusei as being on different paths in life. Rally wished the two would get along again, viewing them as Satellite's best hope.[1]

At nightfall, Jack was approached by Lazar, who arrived on behalf of Rex Goodwin, who felt it was necessary to have a King to rule the city. Lazar pointed to Jack's Mark of the Dragon and said it was the mark of the King. He then told him how to escape from Satellite to New Domino City via a pipeline, but stated that he must bring the cards "Red Dragon Archfiend" and "Stardust Dragon", the latter of which belonged to Yusei. Lazar knew Jack did not posses "Stadust Dragon", but was indifferent as to how he obtained it. As he parted, he asked if Jack wanted to be King of the slums or reign over the city as a real King.[1]