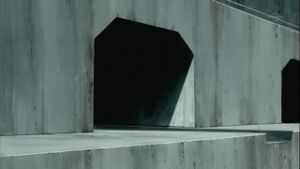 Lazar's hideout was a makeshift residence set up by Lazar while his family were hiding from Iliaster.[1] 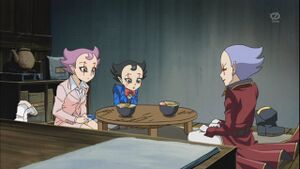 The interior of the hideout.

The hideout is set up inside a large drainage tunnel on a wooden platform, enclosed by some curtains. It has lighting, wooden furniture and some appliances.[1]

His wife Atsuko and son Kaoru would wait here while Lazar would slip outside in a disguise to get food. He was caught by Yusei and his friends before he could return. After losing a Duel to Crow, he agreed to tell them what he knew about Iliaster and accepted the help they offered for his family.[1]

Lazar abandoned the hideout and left Atsuko and Kaoru in Martha's care in Satellite, while he helped Yusei and his friends.[2]