From Yugipedia
Jump to: navigation, search
This article is about the fortress. For the arc, see Ark Cradle (arc).

The Divine Temple seen during the dimension rift.

The Divine Temple, known as the Ark Cradle in the Japanese version, is the fortress of Z-one in Yu-Gi-Oh! 5D's, and Iliaster's ultimate means to changing the future. Originally introduced as the Final Ener-D, the Divine Temple was eventually revealed to have been constructed out of the entire old Satellite Sector and converted into one massive Ener-D Reactor in the future that spins the Ener-D in reverse. The Three Pure Nobles eventually constructed the Grand Design to provide enough power to bring the Divine Temple to New Domino City, where Z-one put the Divine Temple on a collision course with New Domino's Ener-D Reactor, which would cause a massive reactor meltdown, causing a larger scale Zero Reverse, destroying New Domino City.

The insides of the Divine Temple itself is built from the remains of Satellite in the future ruined by Synchro Summons. Within it is where Z-one, Antinomy, Paradox and Aporia find a way to repair the crumbled future in which they were. Furthermore in the same place is where Antinomy, Paradox and Aporia's human bodies are contained in stasis pods after they naturally died of old age.

Within the citadel's Reactor, three Planetary Gears exist, along with a main support gear, which is also known as the Center Gear (which is really Old Ener-D powered by the Gears). Shifting in reverse, the reactor enables the Divine Temple to shut down all the Ener-D in the entire city, rendering everything inoperable with the exception of the Duel Runners used by Team 5D's and Team Ragnarok. It is also connected to Z-one, and as such will only stop if Z-one is defeated in a Duel[1]). The outside of the citadel has the remains of the Satellite Sector, including the Daedalus Bridge.

After being transported through a wormhole via Infinity, Bruno, Sherry LeBlanc, and Yusei Fudo entered a distorted dimension and saw this structure. Yusei saw a vision of his father, Dr. Fudo.

He advised Yusei not to get close to the structure, which he described as the last Ener-D and the place which leads to the destruction of mankind.[2]

Once Yusei and Bruno returned to their own world, the structure was visible in the sky through a hole showing its dimension. The hole was only visible to the Signers and Team Ragnarok.[2]

Strangely after Yusei's intensive battle against Taro Yamashita, a part of the island is seen trespassing into the real world. Strangely at the time this occurred, another part of the Grand Design had lit up before.

Before Team 5D's Duel against Team New World, Primo, Jakob and Lester reveal that the island is really their Divine One's fortress and that it will show up when they win the World Racing Grand Prix. But when that happens New Domino City will be destroyed and the world will change.

Only those with the Mark of the Dragon or the Rune Eye can see the Divine Temple, but if someone is in physical contact with one of these people, they will also be able to see the fortress in the sky. 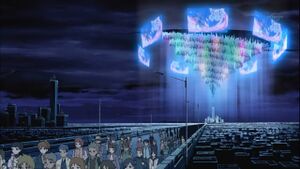 After Team 5D's defeats Team New World, the Grand Design finally gets completed. Thus allowing the Divine Temple to shatter the sky and finally appears physically in New Domino City. Upon viewing the structure more closely, Yusei notices the Daedalus Bridge hanging from it, revealing to himself and the others that the Divine Temple was in fact New Domino City. More so, because the inverted Old Ener-D within it is resonating with the present-time Old Ener-D, it will descend after twelve hours and crash into the present-day generator, thus triggering another, far bigger Zero Reverse that will erase everything within thirty miles. The Divine Temple's Ener-D Reactor is spinning in reverse rotation and producing minus energy. This allows it to take control of all the Ener-D in the city, thus shutting down power in buildings, automobiles, etc. Bruno states that the only way to stop it is if the negative reactor crashes into an Ener-D reactor rotating in a positive direction. Team 5D's soon learn from Team Ragnarok that those with the Rune Eye and the Mark of the Dragon can make their Duel Runners immune to the negative Ener-D, giving Team 5D's a chance to enter the Divine Temple in order to shut it down.

After Yusei defeats Z-one, the Divine Temple stops. Yusei then flies back to the Ener-D core of the Divine Temple to attach a positive Ener-D reactor so the temple will rise back up, believing this will be his final role to the city. However Z-one appears and sends Yusei out the temple saying that Yusei is the one to recreate a new better future for the city. He then sacrifices his own life to use the Ener-D inside of him to reverse the reactor's negative rotation.

In the dub, the Grand Design is not completed after Aporia's defeat, and the Divine Temple doesn't appear during Team 5D's victory celebration.