The Three Pure Nobles are a cabal of Duelists representing Iliaster with a common recurring Infinity theme, consisting of Jakob, Lester and Primo and the main antagonists of the World Racing Grand Prix. Their Japanese names pay tribute to The Three Tenors. The three of them are the only Duelists capable of wielding the all powerful "Meklord Emperors", which have the ability to absorb any Synchro Monster. Together they make up for three parts of Aporia's life, and are 3 embodiments of his despair: his childhood, his early adulthood, and his later life. They, as Aporia, originated from a future that has been devastated by Ener-D, a war brought on by "Meklord Emperors" and Synchro Summoning.

Their plans revolve around using the Signers to complete the Grand Design to unleash Z-one (whom they refer to as their God) in order to change the future as revealed by Jakob.

All 3 of them have one of their eyes covered; Lester's left eye is covered, while Jakob and Primo's right eyes are covered and have an infinity symbol on their face; Primo and Lester over their covered eyes and Jakob over his mouth and jaw with his eye covered by his eyebrow.

They also have gems on their foreheads which correspond in color to the auras of their "Meklord Emperors", except that Jakob's is red while "Meklord Emperor Granel's" aura is yellow.

As the oldest of the trio, Jakob is considered to be the leader when he and Lester confront the Signers, while Lester addresses himself as "sub-leader"; whether or not this is the truth is not known. Being born from the same being, they each represent a different memory of Aporia's: Lester being his childhood, Primo as his young adulthood, and Jakob his older self.

Despite being of the same person, the group seems to operate independently from the actual organization and each other. They operate from an unknown building (possibly Iliaster's main headquarters) where they each have their own throne. 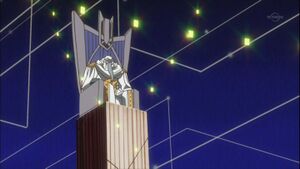 Jakob, sitting in his throne

They are first seen when Primo's card, "Meklord Emperor Wisel" crash lands to Earth in its stone tablet form. Shortly after their arrival, Lazar and several of his security escorts arrive at the crash site claiming it to be forbidden grounds.

However, Primo threatens him with his sword and Lester taunts Lazar, revealing that they are his new bosses and are the three new directors. This seems to immediately remind Lazar that the 3 are from Iliaster. Primo decides it to be a good idea to "test" out his newly acquired card by having a stolen and modified Ghost use it to impose terror to random Duelists, before it is defeated by Yusei Fudo.

The trio are seen once more during the WRGP Premier Party Event, overlooking the party, as their discussing about the "true purpose" behind the Grand Prix being organized by them. However, when Dobocle unexpectedly crashes through and Akiza Izinski manages to drive him off by using "Black Rose Dragon" with her psychic powers, Primo decides to deal with him via a Duel.

After that, Primo returns just in time to where his companions are, as they all witness the match between Yusei Fudo and Vizor. Wondering what happened when the monitor went blank, Jakob states that another door has opened, an incomplete door to the alternate possibility of humans. While Primo himself, wonders about the flash of light that appeared during the Duel.

When Yusei and his new friend Bruno complete a new engine program, Primo has Lazar steal it. When it is brought to him, he uses the program to upgrade a series of Duelbots.

The group makes use of this by creating the Fake Jack Atlas in an attempt to unlock something known as "the Circuit". After the impostor is destroyed by the real Jack Atlas something happens that causes lines on the Circuit to partially appear.

They are later seen watching Sherry LeBlanc cause a fake bomb warning in Sector Security HQ, yet they have no involvement at all with the exception of knowing that Lazar had fled.

Later, shortly after Team 5D's's Duel against Team Catastrophe, Primo betrays Jakob's orders and sends an army of Ghosts after the city; but Vizor confronts and Duels him before his spot is taken over by Yusei Fudo. After Primo is defeated in his Turbo Duel with Yusei, Jakob and Lester confront the assembled Signers and explain what they claim their true goal is. They have long believed that Ener-D was a mistake of human achievement and seek to eradicate all traces of it by destroying New Domino City.

They first persuaded Roman Goodwin to create Zero Reverse in the hopes that it would destroy the whole city. Since it did not, they are now trying to create a second disaster that will cause even more destruction.

Before leaving, Jakob motivates the Signers to continue winning on the WRGP as the trio itself is also going to participate on the tournament.

On Episode 117, they use their powers to make people believe they are a team participating on the WRGP finals, known as Team New World. 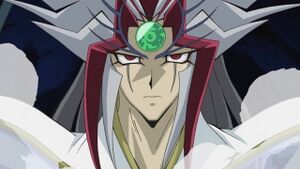 Aporia, the original form of the Three Pure Nobles

In episode 135, their back-story is revealed, being survivors of a chaotic future brought upon by an army of Meklord Emperors, and Synchro Monsters. The Three Pure Nobles were actually the same person, Aporia, who was split into three entities by Z-one, each a different stage in his life. The world that Aporia came from was evolving at an ever-increasing rate, and as the world evolved, so did the human race. However, their evolution was dependent on the Ener-D system, and Synchro Summons were the gears that accelerated the spinning of the Ener-D system, which began to spin more and more faster. Soon, the speed was uncontrollable, and the Ener-D eventually changed and span in a reverse direction, sparking a global disaster similar to the Zero Reverse incident, except on a global scale.

At the same time, an invasion of Meklord Emperors were set upon the world, and the world was sent to ruins after the invasion. All lifeforms in the world had been vanquished, by either the Ener-D system overload or the subsequent Meklord Emperor invasion. Aporia himself witnessed all these events; as a child his parents were killed by a Granel passing by, when he was an adult he witnessed the death of a comrade (by another Granel), and during his later years as an old man he walked the ruins of the world as the last human, until he met the future Z-one, along with a future Antinomy and a future Paradox.

Together they made Z-one into a god, but one by one, the three of them passed away. As the last one to die, Aporia tells Z-one to do whatever it takes to prevent their future from ever occurring, and insisted that Z-one would split him into three separate incarnations, in order to serve Z-one and carry out their task in securing a better future. Z-one promised that he would, and soon resurrected him and created his three incarnations: Lester (the childhood of Aporia), Primo (Aporia's young adult life) and Jakob (Aporia's later life as an old man).

After Yusei started to gain the upper hand during his Turbo Duel against Jakob by destroying "Meklord Emperor Granel", the Nobles responded by merging together and becoming Aporia in their last attempt to defeat Yusei.

Despite the fact that the Meklord Emperors were depicted as the genocidal engines of destruction, the trio uses them themselves, placing the blame mostly on Synchro Monsters, due to the way Ener-D reacts when a Synchro Summon takes place.

Being born out of the same person, the Nobles have highly advanced android bodies capable of fusing with their Duel Runners, with the exception of Lester who can fuse with his Duel Board from his feet. The three nobles' names in the Japanese version are an allusion to the greatest tenors of the 20th century, Plácido Domingo, Luciano Pavarotti and José Carreras.

All three of them are left-handed Duelists, something that they share with Antinomy and Paradox. Very interesting is that Antinomy, Primo, Lester, Jakob and Paradox are all connected to Z-one, as they come from the same desolate future.