Six months have passed since the fight against the Dark Signers, and New Domino City and Satellite have finally been reunited to live in peace and harmony, until the arrival of three mysterious people who claim to be from Iliaster. Plus, a new mysterious Turbo Duelist named Ghost arrives, destroying Duel Runners in New Domino City. Now, only Yusei can stop him. 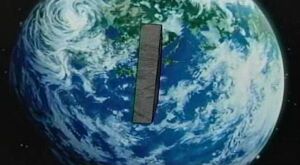 The tablet falling towards Earth.

In outer space, a giant stone tablet tumbles down towards the Earth in the direction of Japan. An infinity symbol is shown and fades away as a shot of the city appears. In the background construction continues on one of many bridges.

Yusei rides his Duel Runner along one of the bridges, narrating that it has been six months since the battle against the Dark Signers and that the city and Satellite are now connected. 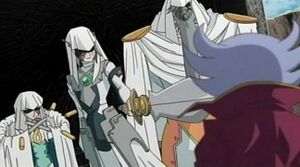 Lazar held at swordpoint by the robed men.

At Sector Security headquarters, Lazar starts to panic that the new Director of the Public Security Bureau has not shown up and the possibility of the Ghosts. After receiving a phone call, his panic starts to amplify.

Three white hooded figures arrive at the crater formed by the tablet and gaze up at the stone structure, which remains intact. The trio consists of a old man, a young adult, while the third looks more child-like. Each of them have something covering one of their eyes except for the old man, who has a thing covering his mouth. Sirens are heard, as Lazar and a group of Securities pull up in squad cars. Lazar makes his way over to the trio, demanding to know their identities, but the younger adult member points a sword at him. The child-like one speaks a bit and starts to titter. Lazar realizes who they are and drops to his hands and knees, bowing to them, seeing that they are members of Iliaster (in the dub, the child informs Lazar that they will all act as the new Directors). 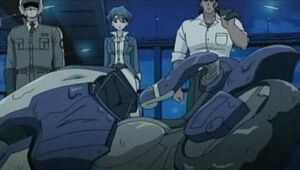 Mina and Trudge as they are shown the mangled Duel Runner.

At night time, a man on a Duel Runner gets chased by a monster, who is barely visible in his visor. Later that night, Security are investigating the incident, where they now have the man in a body bag. Mina and Trudge, who has been promoted to chief, arrive at the scene and show their IDs, granting them entry. They are shown the man's now very mangled Duel Runner.

Later over at Yusei, Crow and Jack's basement, the boys are working on a new Duel Runner engine. Crow, dressed in his Blackbird Delivery outfit, challenges Jack to a race. Jack is mounted on the new Duel Runner, which is fixed in its spot. He says he won't lose to Crow and continues to push the speed of the Runner. Yusei warns him to stop before it overloads, but Jack can't hear him over the noise and continues to accelerate, resulting in an explosion. Outside, clouds of smoke burst out of the building, startling many people in the area. Inside everyone is okay, but the Runner is now in pieces. As Crow and Jack start to bicker, people gather around an overhead window, starting down at them. An old lady named Zora appears at the entrance to the basement and starts yelling at Jack and Crow for causing such a commotion. After spotting Yusei, she calms down and starts to act more affectionately.

Trudge and Mina's squad car pulls up outside the residence. They start to talk with Yusei, Jack and Crow. Yusei shows the remains of the Duel Runner, they'd been working on, while Crow and Jack tell them of their plans to enter the World Turbo Grand Prix. Trudge tells them about the Ghost, prompting Crow to mention the rumors he's heard of how the Ghost forces people into Duels. Trudge tells them about the tournament's new rules, which means they'll be using "Speed World 2" instead of the standard "Speed World". Trudge wants Yusei, Jack, and Crow to help in the capture of the Ghost but Crow refuses and rushes Mina and Trudge out and bolts the door shut behind them, saying the three of them have much to do with getting ready for the tournament.

While leaving, Mina and Trudge continue to discuss the Ghost matter in their car. That night Trudge orders a group of Duel Chasers to spread out over the bridge in search of the Ghost.

Trudge rides his Duel Runner, along a highway, remembering his first Turbo Duel with Yusei. The Ghost shows up on the monitor of Trudge's Duel Runner. Trudge notices his "Speed World 2" has been activated by the Ghost and he engages in the Turbo Duel with the Ghost. The barriers along the road light up, saying it is now a Duel Lane.

The Ghost Summons "Wise Core" and Sets two cards, ending his turn. Trudge questions this Duelist, as he played a monster with 0 DEF.

Trudge Summons "Jutte Fighter" and tunes it with "Samurai Sword Baron" to Synchro Summon "Goyo Guardian". Using "Goyo Guardian", he attacks "Wise Core", but Ghost stops the attack with "Negate Attack". Trudge activates "Speed Spell - Count Up", sending the "Gonogo" in his hand to the Graveyard to up his Speed Counters to four. He removes four of them from "Speed World 2" to inflict 1600 damage to Ghost as Trudge has two "Speed Spells" in his hand. Trudge slows down and his Duel Runner falls behind Ghost's. Trudge also reveals that "Speed World 2" no longer reduces Speed Counters due to damage.

Back at Yusei's basement, the screen on his computer goes fuzzy. Back on the highroad, there's a explosion, where Trudge was dueling. Crow later pases by and hears Security sirens. He looks over and sees Trudge wrapped in bandages being put into an ambulance.

Yusei and Jack rush into the hospital, where Crow and Mina are already waiting. Trudge is wheeled past them on a stretcher. He warns Yusei not to Synchro Summon against Ghost, before being taken into a operation chamber.

Back at their basement, Crow slams his fists off the wall in annoyance with what the Ghost did to Trudge. Yusei tells him to stop whining and chucks him his helmet. The three of them ready their Duel Runners and take off in search of the Ghost. They split up at a highway.

At 3:10 a.m., Yusei comes into contact with the Ghost. He alerts the other two and activates "Speed World 2". The road become a Duel Lane and other traffic pulls out of the way. Security notes the Duel and grants authorization. They set up the circuit, by raising the roadways and adding side ramps.

The Ghost goes first and Summons "Wise Core". He Sets one card in his Spell & Trap Card Zone and ends his turn.

2/700/900) in Attack Position. He then tunes "Samurai Sword Baron" with "Jutte Fighter" in order to Synchro Summon "Goyo Guardian" (

Trudge activates "Speed Spell - Count Up" to send "Gonogo" from his hand to the Graveyard and increase his Speed Counters by two (Trudge's SPC" 2 → 4). Trudge then activates the effect of "Speed World 2" to remove four Speed Counters (Trudge's SPC: 4 → 0) and inflict 800 damage to Ghost for every Speed Spell in his hand. Trudge reveals two (Ghost 4000 → 2400).

1/0/0) from his hand in Attack Position via its own effect. Yusei then Tributes "Turbo Booster" to destroy "Wise Core". This activates the effect of "Wise Core", allowing Ghost to Special Summon "Machine Emperor Wisel ∞" (

This episode begins with an approximately 15 second tribute to the NAS series in honor of the series' tenth anniversary. It starts with Yami Yugi drawing "Dark Magician" then goes on to show his most famous monsters (from left: bottom row: "Curse of Dragon", "Kuriboh", and "Celtic Guardian" middle row: "Alpha", "Valkyrion", and "Gamma" top row: "Magician of Black Chaos", "Black Luster Soldier", "Gaia The Fierce Knight", and "Beta") the screen then shifts to "Dark Magician Girl" alone, followed by "Dark Magician" and pictures of Jaden, Yugi, and Yusei above the 10th anniversary logo on a background showcasing their Decks.

The following card appeared in this episode. Cards in italics debuted here.