"Showdown at Sundown, Part 1", known as "Rescue Kiryu! The Town of Wandering Duelists" in the Japanese version, is the eighty-seventh episode of Yu-Gi-Oh! 5D's. It first aired in Japan on December 2, 2009.

Yusei Fudo ventures to bring Kalin Kessler back, but he dared to be on the side of the guy opposing Kalin. Yusei tries to tell Kalin that he came to help him. However, all Kalin gives him is a cold reply saying that he's forgotten what "satisfaction" is. Thus, the Duel between Yusei and Kalin begins.

Turn 3: Kalin
Kalin draws a card and subsequently sets it. He then activates the effect of "Infernity Randomizer" to draw a card and send it to the Graveyard. If the card drawn and sent is a monster, Yusei will take damage equal to that monster's Level times 200. If it's a Spell or Trap Card, Kalin will take 500 damage. The drawn and sent card is revealed to be "Infernity Destroyer", who is Level 6 (Yusei 3000 → 1800).

6/2300/1000) in Attack Position and destroy Yusei's "Speed Warrior" and "Max Warrior" (as they have less ATK than "Infernity Destroyer"), however Kalin is forbidden from conducting his Battle Phase this turn.

3/1300/500) in Attack Position. Yusei then activates the effect of "Junk Synchron" to revive "Speed Warrior" (

2/900/400) in Defense Position with its effects negated. As he controls a Tuner monster, Yusei Special Summons "Boost Warrior" (

"Junk Warrior" attacks and destroys "Infernity Destroyer" (Kalin 1500 → 900). Since Kalin has no cards in his hand and an "Infernity Monster" was destroyed, Kalin activates the effect of "Infernity Avenger" to Special Summon itself (

1/0/0) from his Graveyard in Defense Position and make its Level the same as the Level of "Infernity Destroyer" ("Infernity Avenger":

The ending credits for the episode is shown to be distinct. Instead of the usual ending video, it shows the voice actors for Yami Yugi, Jaden Yuki, Yusei Fudo and Paradox. This in light of promoting the 10th Anniversary movie, Yu-Gi-Oh! 3D Bonds Beyond Time, awaiting its debut next year. This is shown on the original broadcast only. -OZONE- is played as usual on the DVD version. 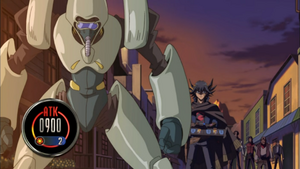 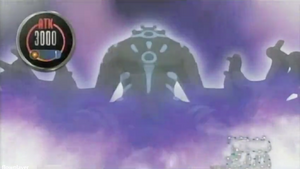