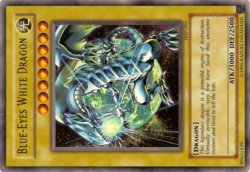 This is what a card looks like in Defense Position.

Defense Position (Japanese: Shubi Hyōji; English-dubbed anime: Defense Mode) is a Battle position in which a Monster Card can be either face-up or face-down, in a horizontal position. In this position, the DEF value is used to represent this card, except where a card effect requires a specific examination of the ATK value.

Also, the controller of a Defense Position monster takes no damage if it is destroyed in battle, even if the attacker has higher ATK than his monster's DEF. Exceptions do exist, as some cards grant the piercing ability, which lets a monster inflict damage in this way. Examples include monsters such as "Spear Dragon" and "Gaia Soul the Combustible Collective", as well as Spell and Trap Cards such as "Big Bang Shot" and "Dragon's Rage". If the attacker has lower ATK than the DEF of the attack target, the attacker takes battle damage, but neither monster is destroyed. If the attacker's ATK is equal to the target's DEF, neither player takes battle damage and neither monster is destroyed.

As Link Monsters and Maximum Monsters in Maximum Mode do not have DEF, they cannot be changed to Defense Position.