From Yugipedia
Jump to: navigation, search
"ZEXAL" redirects here. For the power, see ZEXAL (power). For the team, see Team ZEXAL. For the card, see "Yu-Gi-Oh! ZEXAL" (card). For the archetype, see "Zexal".

Starting with the show's fourth arc, the show was advertised under the name Yu-Gi-Oh! ZEXAL II (pronounced zay-al [IPA: zeɪal] sekando in Japanese, pronounced zek-sul second in English), but both NAS and TV Tokyo classify it as the same show, with the episode numbers continuing from where it was left off instead of returning to the start.[4][5]

The first season of the English dubbed version premiered on October 15, 2011 on the CW4KIDS Toonzai. The second season was brought to CW4KIDS's second Cartoon Block, Vortexx. Official English subtitled episodes can be found on Hulu, though only available within the United States thus far.

Vortexx came to an end on September 27, 2014, and was replaced with a live-action E/I block from Litton Entertainment named One Magnificent Morning.[6][7] On July 11, 2014, it was announced that new episodes of Yu-Gi-Oh! ZEXAL would premiere on yugioh.com each week up until the conclusion of Season 3.[8]

In a city in the near future, Heartland City, kids and adults enjoy Augmented Reality Duels. Augmented Reality Duels are Duels that use Duel Gazers and D-Pads, which when the two are used together, whether on the ground or in the sky, cause monsters to erupt from buildings and fight each other. The hero is Yuma Tsukumo. At a beginner level, he's a champion at absolutely losing. Due to a chain of events, Yuma ends up challenging the number one delinquent at his school, Reginald. His destiny is changed by a bizarre door he's seen in his dreams. When Yuma unlocks this sealed door, countless lights fly from it and escape. And when Yuma comes to, he sees the mysterious entity, Astral, who came from a parallel universe, standing before him.

In order to regain Astral's lost memories, the flying lights from the door that have turned into the 99 "Numbers" cards, these two must work together. A series of mysterious and powerful rivals begin to appear before Yuma and Astral including a young boy named Kite Tenjo, revenge-seeking Vetrix and the maniacal Dr. Faker. 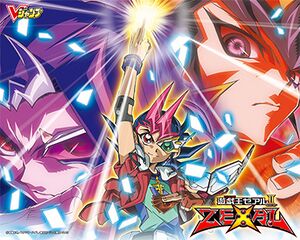 Yu-Gi-Oh! ZEXAL II takes place after the first season, starting with the episode "Attack of the Barians: Part 1". The curtain falls on the World Duel Carnival, peace has finally returned to Heartland City. But now, emissaries from the Barian World, hostile to the Astral World, are aiming to steal the "Numbers" and Astral for themselves. In order to protect him, Yuma, Kite and Shark join together to combat the Barian menace, as they ultimately become involved in the Interdimensional War of two worlds.

When the memories of Shark's past life, Nash, are awakened, he decides to lead the Barians against Astral World. With Nash restored to the throne and Earth fusing with the Barian World, the Seven Barian Emperors decide to invade Earth for the final battle. When Yuma and Nash finally confront each other, their duel will end the Inter-dimensional War in the most unexpected way...

These characters appear in both the anime and manga.

The series is set in the near future. Something unexpected happens as Ryoga Kamishiro challenges Yuma Tsukumo to a Duel. When the mysterious entity Astral appears before them a new legend begins.[9]

Yu-Gi-Oh! D Team ZEXAL is a spin-off of the series made by Akihiro Tomonaga with the cooperation of Wedge Holdings. This spin-off is non-canon to the anime and manga series, and focuses on humor.

Just like in the anime and manga, the series is set in the near future. However, it has no relation to them. Here, Yuma already knows Astral since the beginning, and forms a Dueling Team with Kotori, Tetsuo and Takashi.

All soundtracks were released by Marvelous Entertainment.

An encore screening of Yu-Gi-Oh! 3D Bonds Beyond Time on February 20, 2011 in Japan contained details on the production of Yu-Gi-Oh! ZEXAL. The second 2011 issue of Weekly Shonen Jump included details of the screening a competition on how one hundred and ten readers can win passes to see it.[11]

The following staff are credited.[1]