The World Duel Carnival was a Duel tournament held in Heartland City in the Yu-Gi-Oh! ZEXAL anime.

The World Duel Carnival is really a plan designed by Mr. Heartland and Dr. Faker to find Number holders so that Kite Tenjo can hunt them more efficiently. If the latter wins the tournament, they will gather most of the "Number" cards.[2] Unfortunately, Kite was defeated in his Duel with Vetrix due to his "Number 69: Heraldry Crest"[3], but Dr. Faker still allows the tournament to go as planned because the Sphere Field has the power to take "Numbers" from any holder regardless of the winner or loser.[4] The effect still remains the same due to Vetrix taking Kite's numbers from him.

Others besides Dr. Faker and Mr. Heartland who know or at least suspect the real purpose of this tournament such as Vetrix and Astral are also using it to collect "Numbers".

Dextra and Nistro are acting as referees of the tournament[5] and punish Duelists who cheated.[6] However, their true task is the search of "Number" cards,[6], much like the Battle City tournament was used to search for Egyptian God monsters.

They are also involved in investigated incidents during the tournament and may decide whether something is allowed, as was the case with Tombo Tillbitty's Basket Rules.[5]

If they discover someone cheated, they have authority to decide what kind of punishment the person will get, even if said punishment would be a physical one. For example, Nistro forced a boy into a Duel and ordered him to disappear from Heartland City. Next, he made Flip eat all his "Heart Piece" candies and bound him with a rope. Nistro threatened he would confiscate his deck, while Flip would be disqualified and deprived from all future participation in the tournaments for the rest of his life. Additionally, he claimed he would make sure Flip never Dueled again by beating him out of Heartland City.[6]

Having their own special rules in a Duel is not allowed. However, such rules can be approved by the referee, as was the case with Tombo Tillbitty's Basket Rule.[5]

The preliminaries happen for three days in Heartland City, and each Duelist must accept all challenges. The tournament has an ante rule of betting their Heart Pieces and if all pieces are lost, the participant will be automatically disqualified. In order to enter the finals, the Duelist must gather five correct Heart Pieces to make a perfect heart.[7]

The tournament begun with more than 10,000 participants. Only 24 Duelists were able to complete their Heart Pieces. Trey was a finalist but could not participate in the semi-finals due to him being in a coma after being defeated by Yuma and Astral, therefore only 23 Duelists advanced to the finals.

The first stage of the finals is called SkyScape section known as the Park Section in the Japanese version, which occurs all throughout Heartland. The Duelists use the Duel Coaster system which works similarly to a Battle Royal Duel. The Duelists ride the Duel Coaster and Duel if another Duelist is on the same lane. Multiple Duelists can Duel against the same opponent and several parts of the lanes have Spell/Trap Cards set which activate when the Duelist crosses over them.[8]

Those who remain from the 23 finalists will pass to the next course of the Duel Coaster which is the underground section called Dragon's Den.

The second stage consists of one-on-one battles, which happen in special fields: magma, space, jungle, and canyon. There seem to be beneficial uses with these fields as some Duelists, such as Dextra and Quattro, state that they can put their opponents at disadvantages with these locations.[9] Whatever value of Life Points each player had at the end of the Duel Coaster becomes their starting Life Points for the quarterfinals match-ups. The Duel Fields are treated as Field Spell Cards and provide various effects which affect both Duelists.[10] 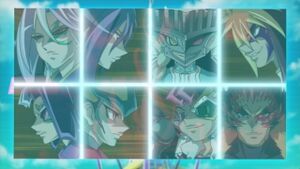 The semifinals of the World Duel Carnival take place on the Duel Tower that's situated inside the Duel Stadium.

The finals continue on the top of Duel Tower where both finalists Duel in the Sphere Field. It is part of Dr. Faker's plan to draw out the power of "Numbers".[4] 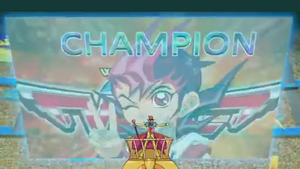 The winner will get a lifetime free passport to Heartland and the title of Duel Champion. Additionally, Mr. Heartland will fulfill one wish from the winner, if possible within his power.[7]

Over 10,000 Duelists participated in the tournament.[8] Of them, 23 qualified for the finals.[11] 15 were eliminated from the finals via the Duel Coaster.[8][12][9] Eight Duelists made their way to the second stage, where six of them were eliminated.

Anna Kaboom was not a finalist as she didn't have a complete heart, but she forcibly took the place of another finalist.[12]

This Duelist Dueled someone who was participating in the WDC. His opponent was under the impression that he was involved in the tournament until after the Duel, when he revealed he possessed no Heart Pieces.