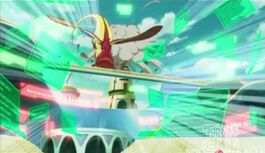 When Duelists engage in an Augmented Reality Duel, a virtual copy of everything around the Duelists appears. This allows monsters to appear to directly interact with the environment, but without actually damaging it even when they appear to. The images created during an Augmented Reality Duel are realistic enough that characters can confuse them with reality[1] and vice versa.[2]

A Duel with Augmented Reality as shown in the manga

During the Duel, several screens in and around the virtual stage appear.[3] Occasionally, when people inside the Augmented Reality field talk to each other from a significant distance, a virtual screen appears to create a video chat. Gauges for Life Points, ATK and DEF, and Level and Rank meters are visible to characters wearing Duel Gazers.

At the Duel Sanctuary, Roku demonstrated some rarely-used features of Augmented Reality Duels: They can turn statues into monsters in a Duel, recognizes wooden cards, and make a Duelist believe they have turned into one of their monsters.[4] Fortuno used Augmented Reality to make Yuma's friends believe they were standing in a pillar in the middle of a lava pit, when they were really just standing on a table in the middle of an empty room.[5] In the Yu-Gi-Oh! ZEXAL manga, a Duelist can interact with the monsters in the Duel, as demonstrated by Captain Corn when he defended against the attack of Yuma's "Number 39: Utopia" using his own sword, then continued to fight the monster while he activated his Trap Card.

Field Spell Cards can have a significant effect on an Augmented Reality Duel. For example, Striker's Field Spell Card "Stadium of Dreams" was able not only to transform a big area into an enormous soccer field, but also transform the attire of the Duelists, spectators and monsters, as well as make the monsters "play soccer" instead of battling how they usually do.[6]