The Team Duel Tournament is a tournament for Dueling Teams in the Yu-Gi-Oh! D Team ZEXAL manga. 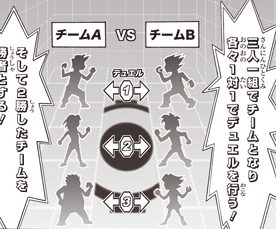 The system of Duels.

The tournament works in a similar way to the World Duel Carnival; the Duels are decided by the teams, who challenge who they want to. The Duels are 1-on-1 battles among the team. For example: in a Team A vs. Team B match, three Duels will happen: 1A vs. 1B, 2A vs. 2B and 3A vs. 3B. The team who obtains 2 wins is declared the winner of the match, and obtains a Digital Stone into their D-Pads. If a team obtains 8 Digital Stones, it advances to the finals.

Participants can check the rules by consulting the D-Network through their D-Pads.[2]

Team ZEXAL takes part on the tournament. Yuma Duels against Gauche in order for his team to participate, and wins.[1] In the first round, Team ZEXAL faces Team Fire Stars. The first Duel is Yuma Tsukumo vs. Shota Geki, which ends with Yuma's win. Tetsuo grants a second win for Team ZEXAL, while Takashi loses his match. With 2 wins, Team ZEXAL is the winner, and obtains their first Digital Stone.[3]

Team Shark is revealed to be the first team to advance to the finals. At that time, Team ZEXAL and Team Air Force were the only participating teams who currently had a total of 7 Digital Stones, with only 1 remaining so that they could go to the finals. Because of that, they face each other, to decide which of them would advance.[5]

The following teams are known to have entered the tournament. Teams whose names are in bold have reached the finals.