From Yugipedia
Jump to: navigation, search
For other versions of this character, see Caswell Francis (disambiguation).
"Todoroki" redirects here. For the card, see "Todoroki the Earthbolt Star". 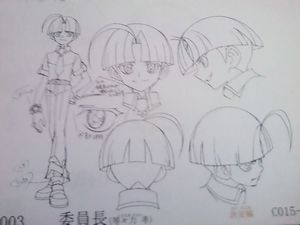 Caswell was accused by Yuma of spreading the virus, but Caswell insisted he was being used by someone else and was unaware of what he was doing. He accompanied Yuma and Tori, leading them to the true culprit, Mr. Kay.[1] After Yuma defeated Mr. Kay, his motives were revealed to be benign, as he simply wanted everyone to enjoy his virtual "Crashbug".[8]

He appears again when Yuma came to school one morning and asks to see his Deck, taking it without Yuma's reply. When asked what he was looking for he said for Yuma's "Numbers". He claimed that even though he beat Shark and Flip it was due to the "Numbers" which made Yuma angry and want to challenge Shark again which he was present for.[9]

He along with Bronk came up with the idea of forming the Super Secret Number Card Investigation Club and found nothing on the school computers about them.[10]

Caswell attended the World Duel Carnival opening ceremonies with the rest of his friends and was surprised at Yuma not receiving a Heart Piece. When the tournament began, he witnessed and was surprised at Flip and Bronk running off out of excitement in order to find Duels just before he witnessed Striker Crossit kicking a ball into Yuma's face and challenge him to a Duel.[11]

During Yuma's Duel with Striker, due to the effect of his "Stadium of Dreams" Field Spell Card, Caswell along with Cathy were transformed into commentators for the Duel. During the Duel, they commented on the moves that each Duelist did, and were both overjoyed when Yuma won.[12]

After meeting Yuma again, he alongside the others try to find Yuma a weak opponent. Once they find Flip, they watch Nelson Andrews's Duel against Nistro, and are amazed.[13] He later appears with the rest of his friends to support Yuma in his Duel against Trey.[14] After Trey activated "Final Prophecy", he realized that what was happening was now real.[15]

He and the others watch Yuma Dueling the Triad of Terror.[16] When the visual for watching the Duel field went out, Caswell finds it suspicious.[17] After Dr. Faker's defeat, he alongside the rest of his friends watched the Duel between Yuma and Kite Tenjo.[18][19]

Caswell, Bronk, Cathy and Flip are Dueling at school when Fender interrupted their Duel. Fender beat the four of them off-screen. Caswell cheered for Yuma during his Duel with Fender. He was stunned at Fender's "CXyz", "Mechquipped Djinn Angeneral" after he Ranked Up his Xyz Monster, "Mechquipped Angineer" with "Rank-Up-Magic Barians' Force".[20]

Later at school, Shark was asked by Bronk to Duel him, who trying to gain his blessings to date Rio, but Shark declined since he was no match for him. He also added that Bronk wasn't even at Yuma's level, causing Bronk to jump to the conclusion that Rio was with Yuma. Flip and Caswell overheard this and spread a rumor around the school. Oblivious to the rumor, an angry Rio challenged Shark to a Duel. During the Duel, Shark was able to counter every strategy Rio played and voiced little faith in Rio's confidence as a Duelist. While Shark was proud that Rio was able to gain courage, he proclaimed that she still had a long way to go if she wanted to beat him and defeated Rio with his "Shark Caesar". Afterwards, Shark learned the rumor from Rio and cleared up the misunderstanding, clarifying that he wasn't the one spreading the rumor. Caswell and Flip were then chased down by Rio.[21]