"Ruffled Feathers", known as "Delayed Nemesis! Robin vs. Gauche" in the Japanese version, is the forty-fifth episode of the Yu-Gi-Oh! ZEXAL anime. It first aired in Japan on February 27, 2012, and in the United States on January 19, 2013.

The third day of the preliminaries begins with Yuma looking for one more Heart Piece. Meanwhile, Nistro who wants to defeat Yuma and Astral, enters the tournament along with Dextra. Consequently while collecting Heart Pieces, Nistro challenges Nelson Andrews.

At Heartland Tower, Nistro and Dextra make a request to Mr. Heartland to allow them to enter the World Duel Carnival. He accepts their request, but reminds them that they will have to get all of their Heart Pieces by the end of the day and their positions as coordinators will be removed. Nistro agrees to this, saying that he has a score to settle with someone. Mr. Heartland seems slightly suspicious, but decides to let them join anyway.

While walking out, Dextra asks Nistro if he was referring to Yuma. Nistro responds that she was correct, thinking how Yuma defeated them both last time with his "Number". Dextra also realizes that Nistro is using a different Deck and asks him why he is not using the Deck Mr. Heartland gave him. Nistro says that if he wants to defeat Yuma and the Original "Number", he would feel better knowing he did using his own personal Deck, also pointing out the fact that his Deck was better than his "Bounzer" Deck. 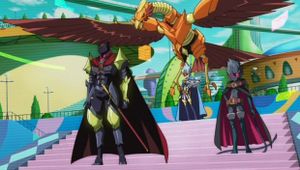 Nelson activates the second effect of "Dimensional Jet Iron", Tributing itself to to revive "Beast-Warrior Puma" (

8/900/3500) in Defense Position. As "Dimensional Jet Iron" has left the field, "Heroic Retribution Sword" is destroyed due to its last effect. As "Phoenix Beast Gairuda" was Special Summoned, Nelson activates its effect to draw a card. 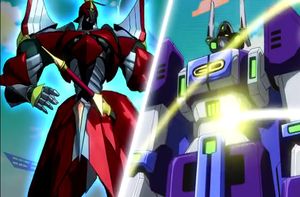