"Hunting Down the Hunter, Part 1", known as "Destined Duel! Astral vs. Kaito" in the Japanese version, is the twenty-third episode of the Yu-Gi-Oh! ZEXAL anime. It first aired in Japan on September 12, 2011 and in the United States on May 12, 2012.

While Yuma seeks the Emperor's Key, Astral Duels against Kite to defend the "Numbers" cards he possesses.

Yuma yells at Shark to wake up and tries to wake him up but he can't. Kite returns with the Emperor's Key and wants Orbital 7 to do an analysis. After the analysis, Orbital warns Kite that there's a gravitational force in the key leading to Astral World. Kite tells him to get the key to respond.

Meanwhile, at the hospital, Yuma finally tells everyone the truth about who Kite is and that Astral lives inside the key. Caswell thinks they might be researching the key using a computer and has an idea.

In the next scene, Orbital 7 tells Kite that he can't get the key to respond using equipment from Earth, so Kite wants him to use a material which isn't found on this planet but in the Barian World, however Orbital tells him that it's very rare. Kite tells Orbital to give up his own piece, but it's precious to him because he cannot function without one. Kite responds that it won't hurt if he gives up a little bit of it, much to Orbital 7's dismay. Orbital removes a piece of the material from his chest cavity and the key responds to it.

Yuma and friends ask for Mr. Kay to help track down the key's location by using a Crashbug Virus, but he thinks it's a bad idea. Caswell talks with Mr Kay privately and reminds him about the Crashbug incident when Number 34: Terror-Byte took control over him. Caswell threatens Mr Kay: if he doesn't help, Caswell will tell everyone he caused the Crashbug incident. Mr. Kay tells him to quiet down and then accepts.

The key makes a portal to Astral World and Kite plans to go through the portal, but Orbital 7 doesn't want to enter the portal and decides to stay on Earth to check the computers, to make sure Kite safely leaves Astral World. Kite jumps to the portal to the realm and looks for Astral.

At the lab, Mr. Kay activates the Crashbug virus hoping to locate the key, but when Cathy says that the virus looks a lot like the one that caused the earlier Crashbug incident, Bronk agrees, which frightens Mr. Kay, but Caswell defends him saying that he would never do such a thing since they know about the incident. The Crashbug virus is sent and eventually finds the key. It's revealed that the key is inside a warehouse owned by Mr. Heartland, so Yuma and the others head there.

Kite finds Astral, who asks why he came here. Kite asks why Astral knows his name and he reveals he is alongside Yuma and that he dueled him once. Kite then asks why Astral collects "Number" cards, and he replies that he needs them for his lost memories. Astral asks why Kite needs "Numbers", and Kite replies that he wants to know the secrets of those cards and decides to duel Astral for the "Number" cards. Astral tells him he will face a bad end if he loses but Kite still wants to duel him.

Yuma's deck lights up and he thinks Astral is dueling Kite.

Astral draws a card and sets Gogogo Golem in Defense Mode and sets the Trap Card Battle Break. Kite draws and summons Reverse Buster in Attack Mode and during battle, Astral can't activate any Traps, can destroy monsters in Defense Mode without applying damage, and gain 500 ATK after the battle, giving it 2000 ATK. He then sets a card. Astral commends Kite's dueling skills and tells him he's a smart Duelist. He also tells Kite that he reminds him of Yuma and how much he misses his parents, but Kite objects, saying he only cares about Hart.

Astral is worried that if he has another monster with 2000 ATK or more, Kite will summon Galaxy-Eyes Photon Dragon and win. He draws a card and summons Gogogo Giant and uses its effect to summon back Gogogo Golem from the Graveyard in Defense Mode, then changes Gogogo Giant to Defense Mode. He then activates Double Defender and sets a card. Kite thought he was going to summon Number 39: Utopia but is surprised when Astral doesn't do so. Kite asks if he's afraid of Galaxy Eyes, as Astral reels back in fear.

Kite activates Photon Hurricane, returning Astral's Spells and Traps on the field to his hand, then Kite sacrifices Reverse Buster to summon Photon Leo, which forces Astral to shuffle all cards in his hand and redraw.

Yuma and his friends arrives at the hideout and his deck glows again. Yuma tells everyone else that Astral is still dueling Kite. Bronk asks Yuma who Kite is and Caswell reminds him that he's a "Number Hunter". Yuma tries to open the door but can't. 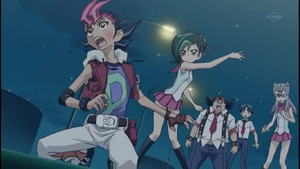 Tori slaps Yuma (this is cut from the dub).

Yuma keeps trying to open the door but it refuses to open. He begins to give up hope, but Tori walks up to him, slaps him in the face and yells at him for that (Tori slapping Yuma is cut in the dub; instead, she actually helps Yuma open the door and then the others do so). Together, they manage to open the door together. They are surprised at their strength, but Mr. Kay calls Yuma's Duel Gazer says that he used the virus to open the door.

The computer systems have been hacked. Orbital 7 looks at the security camera and sees Yuma breaking into Kite's hideout thanks to Mr. Kay.

Astral decides to face his fear and stand up to Kite saying he's "kattobingu".

Turn 4: Kite
Kite draws. He then activates his face-down "Photon Hurricane" to return Spell and Trap Cards Astral controls to his hand, up to the number of cards he has in his own hand; both of Astral's Set cards and "Double Defender" are returned. Kite then Tributes "Reverse Buster" in order to Tribute Summon "Photon Leo" (

6/2100/1100) in Attack Position. Since "Photon Leo" was Normal Summoned, Kite activates its effect to force Astral to shuffle all the cards in his hand back into his Deck and then draw the same amount of cards he returned. Kite's hand contains "Galaxy Storm", "Photon Circle", "Photon Spear", and "Armored Back".