"Life is a Carnival: Part 2", known as "Invincible Good Luck! Numbers 7: Lucky Stripe" in the Japanese version, is the thirty-second episode of the Yu-Gi-Oh! ZEXAL anime. It first aired in Japan on November 21, 2011, and aired in the United States on October 6, 2012.

Charlie McCay escapes on the single-track railroad and Yuma starts the Duel. But Charlie's "Number 7: Lucky Straight" possesses amazing luck. If he hits the jackpot by rolling the dice, then Charlie's Life Points will become 100,000. On the verge of giving up when all of his attempts to stop that strong luck become fruitless, Yuma discovers an unexpected strategy. 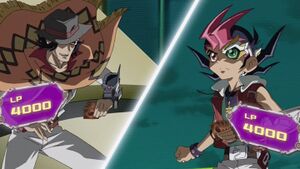 Turn 1: Yuma
Yuma draws. He then Sets a monster and a card.

Turn 2: Charlie
Charlie draws. He then activates the Continuous Spell Card, "Take a Chance". Now, once per turn, Charlie may roll a die. If the result is 6, his Life Points will be multiplied by 5. If the result is anything else, his Life Points will return to the value he had before the initial activation, he will be unable to activate the effect again and he will take 1000 damage during each of his Standby Phases.

4/1500/1000) in Attack Position. Yuma then activates "Monster Slots" to target "Gagaga Magician" and banish "Gogogo Golem" from his Graveyard (as "Gogogo Golem" has the same Level as "Gagaga Magician") in order to draw a card. If the drawn monster is the same Level as the banished monster and the targeted monster, Yuma may Special Summon it. Otherwise, the target and the drawn card will be banished. Yuma draws "Gagaga Girl", so "Gagaga Magician" and "Gagaga Girl" are banished. Yuma's hand contains "Zubaba Knight", "Ganbara Knight", and "Commander of Swords". 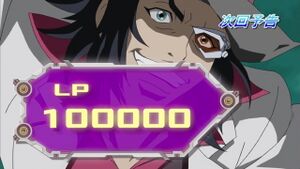 Charlie sets a new record for the highest amount of Life Points.

The Summoning of "Lucky Straight"

Turn 6: Charlie
As Charlie begins his turn, Yuma activates his face-down "Commander of Swords" as there is a LIGHT Warrior-Type monster on the field. Charlie will reveal his drawn card. If it is a Spell or Trap Card, Yuma may either destroy it or a Spell or Trap Card Charlie controls. Charlie draws "Sun Scale" - a Spell Card. Charlie explains that with "Sun Scale", he can, once a turn, roll a die and if he gets a six, then all monsters Yuma controls will be destroyed. Yuma almost selects to use "Commander of Swords" to destroy "Dice Crisis", which would activate its second to last effect and return control of "Utopia" to Yuma, but, by Astral's advice, instead chooses to destroy "Sun Scale" (When "Sun Scale" was destroyed, Charlie lost the good luck granted to him by Number 7).

Turn 7: Yuma
Yuma draws "Comeback" and subsequently activates it to target "Utopia" and take control of it as it was a monster he owned. Yuma performs Chaos Xyz Evolution and overlays "Utopia" and its Overlay Units in order to Xyz Summon "Chaos Number 39: Utopia Ray" (