"Rock and a Hard Place", known as "Crossroads of Destiny! Yuma Throws Away Dueling!" in the Japanese version, is the forty-fourth episode of the Yu-Gi-Oh! ZEXAL anime. It first aired in Japan on February 20, 2012, and in the United States on December 29, 2012.

Yuma finds himself in conflict about the "Number" cards, knowing that both Kite and Astral have their reasons for obtaining them. However upon learning that his father is still alive, Yuma tries to leave in search for him. Roku appears to help Yuma with his situation.

As the Duel ends, Kite is exhausted, while Yuma feels praised about winning as well as Tori and Orbital 7 celebrating (when they realized that they are celebrating with each other, they ignored each other). Quattro mutters that he and Trey lost. Kite then falls in his knees in pain while Yuma and Orbital asks what is going on. Kite ignores them and asks to Quattro where is Hart. Quattro then tells him he cannot tell him. Kite then uses Photon Hand to take his "Numbers" and his soul but Quattro uses his Crest to stop the process and blow Kite away. Then Astral attempts to take Trey's "Numbers" but his crest stopped that from happening and blows him away. While this is happening, Trey can see Astral sounding shocked.

Yuma asks Astral what is going on but the latter is not sure. Quattro tells them that their crests prevents them from taking their "Numbers". A portal then appears behind Quattro and he departs in it. Trey asks what is going on while Vetrix tells him to come home. Kite asks them where they take Hart to as Trey departs leaving everyone stunned about what happened. Quinton tells Kite that Hart is here. Kite asks if he is okay but he doesn't respond. Yuma recognizes him as the guy who took Hart away in the tower. Kite then pushes Yuma out of the way and asks Quinton what he did to Hart. As his crest glows, he puts Hart down through telekinesis. Kite kneels down to Hart asking what Quinton done to him and angrily asks Quinton what does he want with Hart and who he is. Quinton tells Kite that Hart has some strength left but choose to give it to Kite. He mutters about why he isn't well. Yuma tells Quinton that he has to explain what he done and Quinton responds that Yuma is as resistant as Kazuma. Yuma asks him about how he knows about him. Quinton proceeds by telling Yuma that Kazuma is still alive in Astral World. Yuma and Astral is surprised about hearing this and asks for some more details but Quinton leaves without a word.

On the street, Yuma wonders if Quinton is serious and asks to Astral if he knows anything about Kazuma if he is from Astral World but Astral has no memories about him. Yuma suspects that one of the "Numbers" he has not got yet is about Kazuma. Yuma then remembers Kite telling Yuma that he sold his soul to the devil to save Hart, and later telling him that Hart was born fragile. Yuma deducts that if he collects "Numbers" to gather Astral's memories, it will put Hart in risk but when Yuma remembers Hart saying that he will destroy Astral World to produce more screams and if Astral World is in danger of being destroyed while Kazuma is in it, Yuma holds his head and says that whatever happens, everything will end badly. Then Yuma smiles and runs home saying he is going to Astral World while Tori and Astral runs with him.

Yuma sneaks into his room and puts some of his parent's artifacts as well as his things inside the bag while Astral asks him about collecting "Numbers" for his memories. Yuma tells him that it is just that Kazuma is his dad and wants to bring him back. Yuma then tries to sneak out of the house only to get caught by Kari Tsukumo, Haru Tsukumo and Tori. Kari tells Yuma that Tori told everything about what he is planing to do and what is going on and tells Yuma to go back inside but he escapes. Kari tells Yuma to stop. As Yuma is thinking about saving Kazuma, A voice asks Yuma if he is giving up on the World Duel Carnival. Yuma stops and asks who is there. On top of the bag Yuma is carrying, Roku jumps off it and greets Yuma. Yuma recognizes him and greets him. Roku asks Yuma what is he running from. Roku says that he came down from the mountain as he expects Yuma to give it all he has on the WDC and found out he is facing a problem. Yuma tries to run but Roku tells him to Duel him however Yuma tries to get out of it but this angers Roku so he has to Duel. Astral says that he will not help Yuma win. Roku and Yuma prepare to Duel.

Meanwhile, Vetrix says that he feels Hart's power and tests it. As he is testing it, some of the floor collapse.

Some time into Yuma and Roku's Duel, Yuma draws "Gagaga Girl" and Summons her. He now has 3800 LP and has "Gogogo Golem", "Gogogo Giant", "Zubaba Knight" and "Gagaga Magician". Roku has a face-down Spell/Trap Card and a Monster Card in fare-down Defense Position. Yuma declares an attack with "Gagaga Girl", but Roku activates "Mirror Force", destroying all of Yuma's monsters. Roku accuses Yuma of being impatient and wanting to end the Duel quickly, without employing any strategies, but Yuma says that he still has the advantage. Roku begins his turn. He Flip Summons "Queen's Knight" and Normal Summons "King's Knight", whose effect activates, Special Summoning "Jack's Knight". He then activates "Polymerization", fusing the three into "Arcana Knight Joker", surprising Yuma with its high ATK. Roku declares a direct attack, which defeats Yuma.

Yuma then asks for a rematch but Roku declined in anger and ask why Yuma is impatient. He adds that in the state Yuma is in, he cannot defeat him. Yuma explains to Roku that if he helps Astral, Hart is in risk but if Hart destroys Astral World and Kazuma is in it and Roku asks if he decided to run away from his problem. Yuma says that it is not that and Roku says that helping his Father is brave but not knowing where to start makes it seem like Yuma is running away and reminds him not to abandon Dueling, the World Duel Carnival and Astral. Roku adds that he thinks Yuma is scared to face his problem. He tells Yuma to not away from Dueling and reminds him that it is the bond between him and Kazuma. Yuma says that he understands and says that he will keep Dueling which everyone is happy about.

Yuma asks about who set the World Duel Carnival up to Roku and he says that Mr. Heartland doesn't call the shots and says that the person who built Heartland City is a scientist called Dr. Faker. He adds that not everyone knows anything about him. Haru says that Kazuma lead him on one of his expedition which is the last expedition before disappearing. Astral thinks Kazuma, Dr. Faker and Mr. Heartland are connected. Yuma thinks that he must win the WDC.

Vetrix is surprised about Yuma and asks Quinton about him. Quinton responds that Yuma Tsukumo possesses the Original Number. Vetrix is surprised to hear Yuma's last name is "Tsukumo" and ask if he is the son of Kazuma. Quinton confirms this while Vetrix considers this impossible. Trey is seen looking outside wondering if what he saw when his crest stops Astral from taking his "Numbers" is the Original Number and want's to learn more about Yuma.

Yuma picks a card and Astral says that picking that card makes the other card unneeded which annoys Yuma as he wants both cards. So Astral tells Yuma to protect it with a certain trap but Yuma ask him what trap but even when Astral tells him where, he still doesn't get it. Yuma says that he will win the WDC.

Duel is shown from an unspecified turn. Yuma has 3800 Life Points and controls "Gogogo Giant" ( 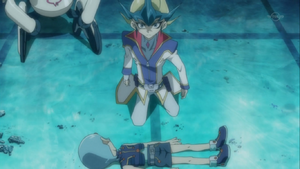 The dubbing mistake with centered Ranks on one Xyz Monster shown.

The following cards appeared in this episode. No cards debuted here.